One-Two Punch: Fishing for Walleyes with Shiners – (Part Two The How)

Become one with the jig when fishing for shallow-water walleyes In part one of my article “One-Two Punch: Wrangle ‘Eyes with Shiners,” I talked about the when and where of catching walleyes in shallow waters during the shiner spawn. Now let’s get down to the how.

A larger-spool spinning reel like the Daiwa Tierra 1500 and St. Croix rods, especially the 7-foot EYECON Finesse rod or the Avid 6’6” MLF, is primo wrangling gear. You gain distance with a large arbor reel that holds more line, and longer, faster action spinning rods do the same, plus increase sensitivity.

Now, if you’re one of those “I always use 6- or 8-pound test” guys, you’ll have to get outside your comfort zone. I can almost guarantee that you won’t be able to get the casting distance (or correct rate of fall) necessary to wrangle these spring pigs.

Years of trial and error have made it painfully clear that 4-pound test mono or braided line, 8-pound (2-pound diameter) are absolutely essential to pitching these practically weightless baits the distance needed to catch spooky shallow-water walleyes.

Line color is also critical. Camo works well in places where there’s weed growth coming up; Steel Gray is almost invisible in clear water. For guys who do a lot of line-watching, Line Indicator Camo is also the better choice.

Obviously, braid not only increases casting distance – but you can also feel the slightest taps, whether it’s a taste-testing ‘eye or bumps on the bottom. I make sure to have rods rigged up with both.

Since braid doesn’t have any memory (and almost no stretch), I’ll use an 18- to 20-inch 4-pound diameter leader of fluoro or mono to prevent the jig from rolling back onto the line. I incorporate a small Aquateko InvisiSwivel to attach the leader to the braid, rather than a line-to-leader knot like the Double Uni, which makes switching out leader material a lot quicker. In natural lakes with healthy northern pike populations, it just makes sense. 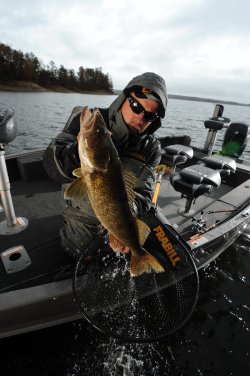 The man, the myth, the twin, the walleye wizard, and author – Scott Glorvigen – aces early-season walleyes in the hyper-shallows, using hard stem bulrushes as the starting point for his search. Photo courtesy of Frabill

When it comes to jig heads, there’s definitely a tool for every job. I fish a short-shank jig head like Northland’s stand-up Fire-Ball® Jig, which orients the bait at a 45-degree angle higher off the bottom, making it easier for walleyes to see. On flats with sand grass growth, this can be key.

You also want the lightest jigs you can throw to reduce the rate of fall in the water. This gives walleyes a greater opportunity to feel, hear, locate and strike the bait. It’s especially critical in weed beds. Increase the drop time and walleyes have more time to move over, investigate, and hopefully, eat it. A heavier jig reduces this window of opportunity.

1/16-ounce jig heads are a good place to start.

The Color of Money

When it comes to jig head color, white, phosphorescent glow, and anything pearlescent—especially in clear waters—are must-haves for wrangling.

In slightly stained waters I’ll fish chartreuse, lime green, or two-tone colors like Northland’s Glow Watermelon, a combination of three colors: phosphorescent glow, chartreuse, and orange – It’s my number one go-to color in any body of water. You can cover a lot of forage possibilities with that pattern. It’s the Swiss Army Knife of jig heads.

No Substitute For Meat

Because you’re competing with thousands of shiners during this bite, here’s a situation where matching the hatch is a must. While soft plastics have earned their stripes in walleye fishing, there’s simply no substitute for active and lively spottail shiners in this application.

And don’t worry about burning through the bait. It’ll pay off in spades. As soon as the shiner starts losing its scales and that pearlescent flash, put on a new minnow. That flash is what triggers the bite. Without it, your bait becomes a wallflower at the dinner party.

And, since it’s a party, you’ve got to make your offering look as sexy as possible. And this is where most fishermen fail, even if they’ve done everything right up to this point. With short-shank jigs, you run the hook through the mouth and out through the back of the skull. It keeps the bait on the jig a lot longer and increases the odds of catching more fish.

If I’m getting short strikes I’ll move to an Aberdeen-style jig head. In this case, hook the shiner by running the hook into the mouth, out through the bottom of the gills, rotate the shank, and come out through the side under the dorsal fin. Hooked correctly, the minnow will swim on its side (mimicking a spawning shiner) when you work it back to the boat.

At the last resort, I’ll go to a stinger hook and make sure the two barbs are up versus down.

Given the reality of invasive species and state laws to prevent their spread, I carry well water with me in a couple of two-gallon jugs in a cooler with ice blocks. Unless they’re on the end of my hook, my minnows never touch the lake (or river).

For years I’ve been buying two bags of minnows at a time. I keep one unopened in the bag with oxygenated water and ice it in the cooler. I open the second bag of shiners and empty it into the aerated and insulated 6-gallon Frabill Aqua-Life Bait Station, which keeps them cool. As needed, I use this bait throughout the day. Plus, I have the jugs of well water in the cooler to refresh the minnows without the fear of contamination. Then, depending on the bite, at the end of the day, I might still have that unopened bag of minnows for the following day!

Keep in mind that the shiner spawn isn’t a singular event. It can happen over days, even weeks, and several times throughout the day. Don’t disparage if you don’t dial in the bite right away. Spend the time and investigate clumps of downed bulrushes in shallow water—patience definitely pays off.