The largest lake in Minnesota’s fishing-friendly Otter Tail County, this iconic body of water is an angler’s dream. Though 120 feet at its deepest point, it’s loaded with structure and cover including flats, holes, humps, breaklines, and weedbeds. In fact, 57 percent of the lake is less than 15 feet deep. All this makes for an ideal walleye fishery, which is supported by the fact that about 90 percent of the angling hours spent on Otter Tail are dedicated to the pursuit of this prized gamefish.

Veteran fishing guide and angling educator with Fishing The Midwest, Team Northland member Mike Frisch calls it one of the Gopher State’s most diverse lakes, in terms of topography. “And,” he adds, “the most successful fishermen here are those with skills in the use of sonar equipment.”

All that being said, anglers can still predictably track walleyes through the seasons. Below, Frisch outlines hotspots, as well as fishing gear and techniques, to help you zero in on Otter Tail’s eyes year-round. 1. Late fall on Otter Tail sees walleye anglers plying the lake’s many deep holes with heavy jigs and minnows for eater-size fish that have moved to winter zones. Frisch, however, favors probing shallower cover as long as water temps exceed the low 50s, explaining that larger walleyes tend to hang in green weeds later into the season, especially weeds near deep water—such as the various breaklines along with Many Points Flat in the lake’s northeast quadrant, as well as the saddle area on the northeast end of Diamond Flat. As you explore other areas of the lake, keep in mind that green weeds close to a deep area are the key. His preferred approach is to troll a hand-tied ’crawler harness—a size 4 orange or green hook on a 42-inch snell—behind a 2-ounce Rock-Runner® Bottom Bouncer. Move at a fair clip (3/4 to 1 mph) through weeds from 12 to 22 feet deep to locate fish. Once you find them, zero in with the trolling approach, or tie on a Fire-Ball® Jig-and-minnow and fish vertically. As an alternate search presentation, the angler sometimes trolls a single size 4 Roach Hook behind a ¼-ounce walking sinker and a chartreuse bead, but instead of a nightcrawler, he baits with a medium-size sucker minnow. “Suckers often outperform redtail chubs on Otter Tail during the late season,” he explains. 2. Primary breaklines become the focus once the lake’s surface forms ice thick enough for safe foot travel. Frisch recommends anglers hike to the main break out from the Pelican Bay boat ramp, or to Horseshoe Bar and the southerly breakline on Otter Tail’s west end. Early-ice walleyes generally hold between 12 and 22 feet and can be anywhere along with the break. Jig a 1/8-ounce Super-Glo Perch Buck-Shot® Rattle Spoon, or a UV Glo Perch or Purple Tiger Buck-Shot® Flutter Spoon, tipped with a minnow head. At the same time, arm a second deadstick rod with a tail-hooked sucker on a size 2 Roach Hook under a Lite-Bite Ice Float. Later in the winter, when the ice can support vehicles, fishing action shifts to the mid-lake structure. Any point or turn on the edge a major flat can hold a school of fish, according to Frisch, as can any of the submerged humps. The cluster of humps north and east of Big Flat is an easy starting point; as you fan out from there, he recommends concentrating on those that top out anywhere from 30 to 15 feet below the surface, using the methods already mentioned. 3. Otter Tail has a reputation for offering consistent walleye action from the mid-May opener through early June. Consequently, the lake can get busy, especially on the weekends. Try starting out trolling the edges of the two holes southeast of Balmoral Flats, concentrating on the saddle between the two holes. Build a live bait rig using a 1/8- to ¼-ounce Roach Walker Sinker and single size 2 Roach Hook with a plastic bead in front of the hook for color. Bait with a spottail shiner and stay on the move, he says. Walleyes will typically be in 8 to 22 feet of water—shallower when the wind blows, deeper on calm days, or when boat traffic moves them down the slope. Also try trolling/snapping a 1/8- to ¼-ounce Fire-Ball-and-spottail, or on windy days, a 1/16- to 1/8-ounce Firetiger Whistler Jig® tipped with a spottail. “There’s something about the Whistler’s blade that attracts bigger fish when the wind blows,” says Frisch. If holes and saddles become crowded, another option is to troll the north shore breakline from Amor Point to the Otter Tail River. “It’s a lot of water, but the whole thing has potential to hold early-season walleyes,” says Frisch. “I spend a lot of my time in May and early June along with that break. Troll the same live-bait rig or jig-and-shiner combos mentioned, and if you locate a pod of fish, don’t hesitate to stop and pitch a jig to it.” 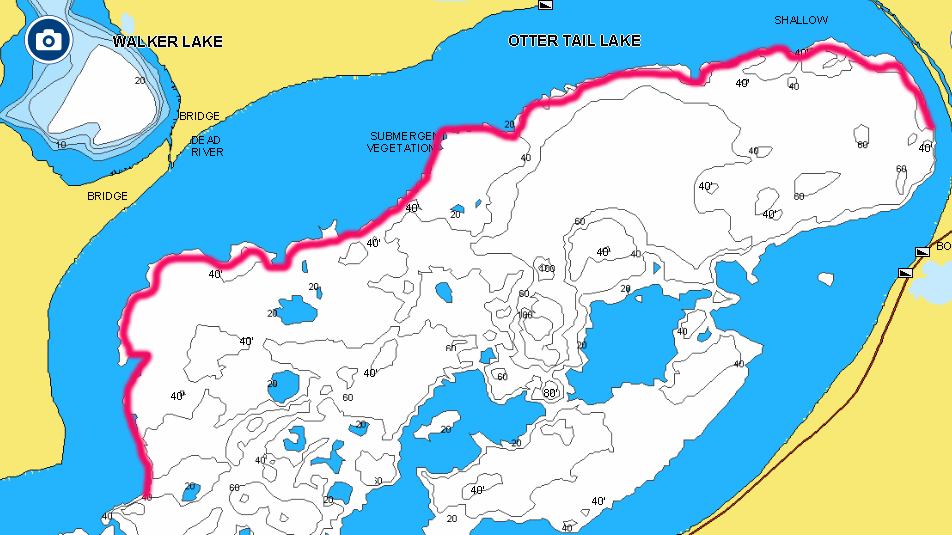 4. From mid-June through early fall, the angler suggests heading for any of the many main-lake humps that top out at 35 to 20 feet below the surface to catch numbers of eater-size walleyes. Look for fish on or near a hump before dropping and trolling the ’crawler harness Frisch outlined above, and don’t hesitate to move to the next piece of structure if you don’t see fish or the walleyes refuse to cooperate. Likewise, coming back to a hump you checked previously could pay off. To target larger walleyes, head for the large main-lake flats—Big Flat and Many Points Flat, to name two—and look for weeds in 4 to 12 feet of water. Pitching a jig-and-shiner or a jig-and-redtail combo along the edges and into the beds often produces better-quality fish during the warm months. On windy days, Frisch also trolls a live-bait rig along these weed edges.