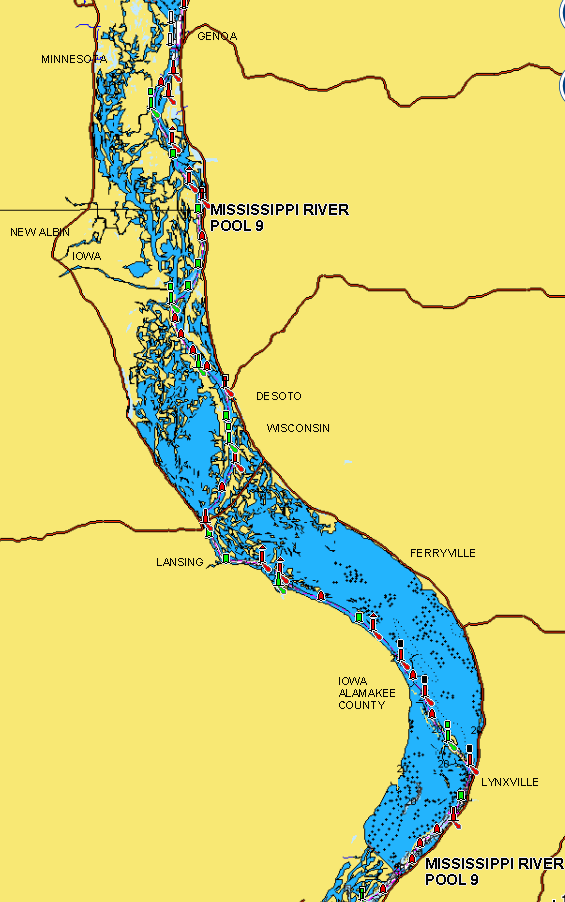 The Mississippi River Pools 9 & 10 offer a multi-species fishing paradise between Lock and Dam No. 8 near Genoa, WI, and Lock and Dam No. 10 at Guttenberg, IA. Collectively, the pools provide 64 miles of the river filled with structure and cover, natural and manmade, as well as a maze of backwaters, sloughs, and side channels.

This rich and diverse fishery stretching from dam to dam supports gamefish of several species in plentiful numbers, which in turn attracts anglers of all types from far and wide.

Pool 9 covers roughly 35,000 acres. Its upper reach features countless islands, channels, and backwaters as well as the junction where the Upper Iowa River joins the Mississippi, while the lower section is dominated by a broad expanse of open water. Bounded by limestone bluffs, Pool 9 encompasses most of the river’s natural floodplain.

Part of the Upper Mississippi River National Wildlife and Fish Refuge, Pool 10 contains nearly 21,000 acres of aquatic habitat. Unlike other pools, this one features no large open-water area. Rather, it is mostly a vast network of islands, channels, and backwaters from top to bottom. In addition, the Yellow River joins the Mississippi from the Iowa side in Pool 10, while the Wisconsin River flows in from the east.

As an angler, and in his capacity as Sr. Tournament Director of the Master’s Walleye Circuit tournament trail, Team Northland member and fishing guide Dan Palmer has spent innumerable days on this stretch of Ol’ Muddy and is well acquainted with its intricacies.

Forming an angling game plan for Pools 9 and 10 can be daunting, he says, simply because of the nearly limitless number of options predators like walleyes, saugers, and smallmouth bass have in terms of structure and cover. The trick, he continues, is to focus on high-percentage areas, places where fish tend to congregate due to optimal current flow and forage availability. 1. “Both dams, but especially Lock and Dam No. 8, are usually great places to fish almost all year long,” he says, “but the action is especially good in the spring and fall.” Early walleye action typically begins to heat up in April, with May and June bringing yellow perch and other species more into play. “That’s the great thing about these spots,” the angler says. “You can catch just about anything—walleyes, smallmouths, perch, northern pike, catfish—below the dams. Just anchor your boat as close as you (legally and safely) can to the dam; pitch jigs toward the structure and snap them back to the boat, or just jig vertically.”

He recommends trying a ½-ounce Buck-A-Roo® Jig, or a Bionic Bucktail® up to ¾ ounce. “Hair jigs usually produce better than anything else,” he explains, “and a lot of times you can fish them without live bait. If the bite is tough, though, you can tip them with a minnow or a soft plastic bait like an Impulse® Paddle Minnow or Smelt Minnow. A heavy Buck-Shot® Rattle Spoon is another option. Fish it vertically, or cast and snap it back. You can count on losing a few lures—at least until you get a feel for how long you can let them sink before they fall into the rocks and snags on the bottom.”

September marks the beginning of fall fishing, and the action below the dams generally remains steady through the cold months. 2. Wing dams—submerged structures placed along the navigation channel to help divert current flow into the channel—hold fish as well. They will appear on any good electronic chart, but you can also locate them by looking for the disturbance they create on the surface. Though walleyes and other species could hold on the end or on top of a wing dam the high-percentage area is along the dam’s upstream face. Pitch a minnow- or soft plastic-tipped RZ or Fire-Ball® Jig and let it settle to the structure’s base. The proper weight is dictated by the current’s strength and speed.

The manmade structures continue to hold fish throughout the summer months, but Palmer explains that walleyes can also be more spread out, holding in the area between wing dams as they move from one to another. “To catch these fish, I tie on a 3-way rig and start trolling,” he says. The rig consists of a ½-ounce RZ Jig rigged with soft plastic ringworm as a dropper, with a Gum-Drop Floater-and-leech, or Rig’n Leech on a 2-foot leader trailing behind.

“Just work your way upstream around and between the wing dams,” he says. “Fish could be holding anywhere,”

Wherever you find it, shoreline rip-rap can be productive in the summer as well, he says, particularly for walleyes and smallmouths feeding on crayfish and baitfish. Try fishing a jig-and-minnow or jig-and-plastic, or a cast a Rippin’ Shad a long the rubble. 3. Panfish anglers focus on the pools’ extensive backwaters and sloughs year-round. They are extremely popular in the winter, however, when cold weather and ice allow access to these areas by anglers on foot. Hotspots in this vast complex are too numerous to list here. In fact, many of the places named, that are known to veteran anglers do not even appear on standard maps. If you need a place to start, try the Ambro Slough Landing on the east side of Pool 10 north of Prairie du Chein on Highway 35. From there you can access the large Ambro Slough system, including popular fishing areas on Big Missouri and Mud lakes. You’ll be limited only by the availability of safe ice and the distance you’re willing to walk to find fish.