Lake of the Woods, MN

Lake of the Woods, fed by the Rainy River and other tributaries, is a magnificent destination for sport fishermen and nature lovers alike. At 1,680 square miles in area, the huge lake occupies parts of Minnesota as well as Ontario and Manitoba, Canada.

Despite its expanse, and its many square miles of deep, featureless mud flats, veteran fishing guide and Team Northland Pro Jon Newburgh of Baudette, Minn., says Lake of the Woods is one of the easiest walleye lakes to fish. Jigs, live bait rigs, and crawler harnesses cover all the hardware an angler needs.

Vast areas of Lake of the Woods lie within Minnesota, and a general fishing license is all that’s required if you remain within the boundaries. For 2016 the daily bag limit in Minnesota is 6 walleyes and saugers in combination, with no more than 4 being walleyes. There’s also a protected slot limit of 19½ to 28 inches, though one walleye within the legal bag may measure more than 28 inches. If you intend to fish Canadian waters, you’ll need an Ontario and/or Manitoba fishing license, as well as your Passport and a Remote Area Border Crossing permit. You must follow reporting procedures, and observe all provincial fishing regulations regarding bag limits and tackle restrictions.

1. According to Newburgh, who guides out of Wheelers Point Resort & Lodge, Lighthouse Gap, between Sable Island and Pine Island in Fourmile Bay is a productive—and popular—spot for walleyes from late May through early June. Fish the gap as well as the sandbar that extends into the lake. He recommends vertical jigging a Fire-Ball® Jig or Swivel-Head Jig tipped with a frozen shiner or white Impulse® Paddle Minnow in 13 to 19 feet of water. The gap gets a lot of boat traffic, as well as numbers of anglers; it’s best to anchor and jig below the boat rather than drifting or trolling,” he says, “and stay on the Pine Island side as the borderline runs down the middle of the gap.” Current strength varies with the flow from an upstream dam on the Rainy River, so necessary jig weights range from 3/8 to 1 ounce. In the lake’s tannic-stained water, Gold is a go-to jig color, but Bubblegum is hot as well. “I’ve done very well with the Bubblegum Fire-Ball® Jig and white Impulse® Paddle Minnow,” he says.

2. Later in June many walleyes moved over the lake to the vast mudflats. Anglers must search for fish on sonar or by making long drifts with a live bait rig, Baitfish Spinner Rig, or Baitfish Spinner Harness behind a ¾-ounce Roach Walker Sinker or Rock-Runner® Bottom Bouncer, according to Newburgh. Spice the hooks with Impulse® Nightcrawlers, Rig’n Leeches, live bait, or frozen shiners. In addition, the guide suggests fishing the structure-rich reefs and shoals near Knight Island. “Anchor off edges of rockpiles and humps and vertical jig ¼- to 3/8-ounce RZ Jigs using the baits already mentioned,” he says. 3. Through July and August look for walleyes and on the flats as well, especially in the great expanse between Garden Island to the north and Long Point on the south shoreline, as well as the zone out from Pine Island. “They are big areas,” says Newburg, “but you’ll find walleyes there in the summer.” If you choose to bypass the Pine Island Flats, the guide suggests starting your search closer to Long Point as the bottom falls faster, and drift or troll the baits, ‘crawler harnesses and spinner rigs already mentioned behind a 1-ounce bottom bouncer. “Gold is a standard color, and when I’m fishing ‘crawlers, I like some gold in the blade—Gold Perch or Gold Shiner. With leeches, bright blade colors work better. Dace Pink is a great option,” he says. 4. Walleyes start moving back toward the Rainy River in September and October. Among the early-fall hotspots is the area off Zippel Bay. Newburgh recommends vertical jigging or drifting Fire-Ball® Jig, RZ Jig, or Swivel-Head Jigs, starting at the 20-foot contour, and moving shallower or deeper until you connect with fish. A white or emerald shiner Impulse® Paddle Minnow is a good bait option, as are frozen or live shiners. Lighthouse Gap is another good spot this time of year as shiners are beginning to move upriver now, and walleyes stage there to intercept them. 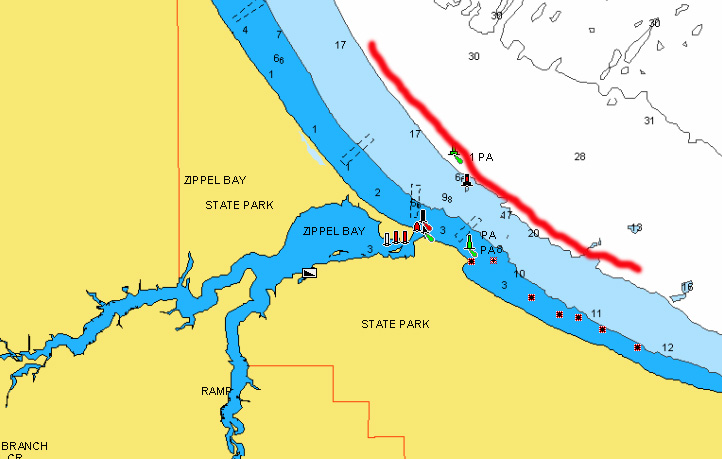