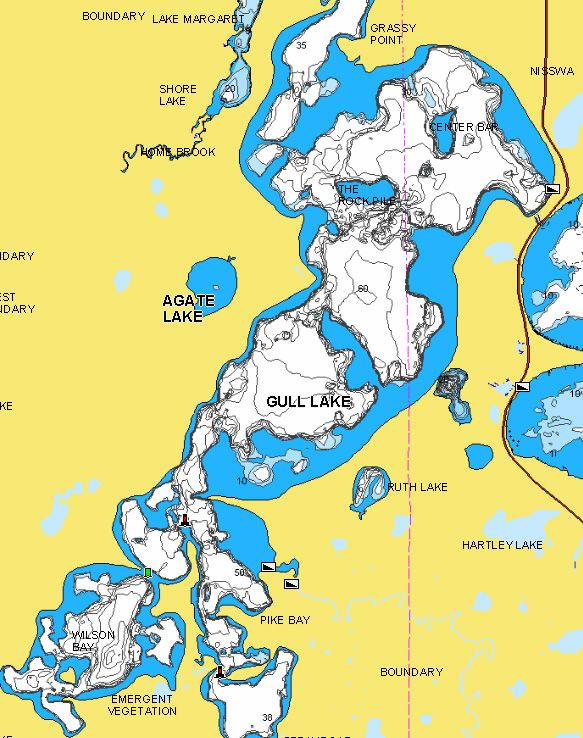 Gull Lake, near Brainerd, Minn., offers nearly 10,000 acres of open water and features an abundance of classic walleye structures. The lake averages 30 feet in depth but is 80 feet at its deepest point, and nearly a third of the lake is 15 feet deep or shallower.

It’s the center of one of Minnesota’s most popular recreational regions, and thus shorelines are highly developed with homes, cabins, and resorts. Yet, Gull Lake remains among the state’s more productive sport fisheries.

Team Northland member Jamie Dietman grew up working in his family’s bait shop in nearby Park Rapids and guiding anglers on nearby lakes. He now resides in Brainerd, and Gull is among his home waters.

1. From the season opener in mid-May through mid-June Dietman suggests fishing around the Grassy Point as well as the Hayfield, along the opposite shoreline. During the early-morning and late-evening low-light periods, he recommends fan casting ¼- or 3/8-ounce UV Mimic Minnows or No. 5 crankbaits over the weeds in 7 to 10 feet of water. When fishing during the daylight hours try using a 3/8-ounce Fire-Ball® Jig tipped with a spottail shiner in these same areas. 2. Another early-season sweet spot is the channel that enters Booming Bay from the northwest. Dietman recommends casting a Fire-Ball® Jig or RZ Jig tipped with a shiner. Or, troll the weed edges with a Roach Rig—a 3/8-ounce Roach Walking Sinker dragging a minnow-baited Roach Hook on an 18- to 24-inch leader. Many anglers catch walleyes from shore near the Hwy. 77 Bridge this time of year. 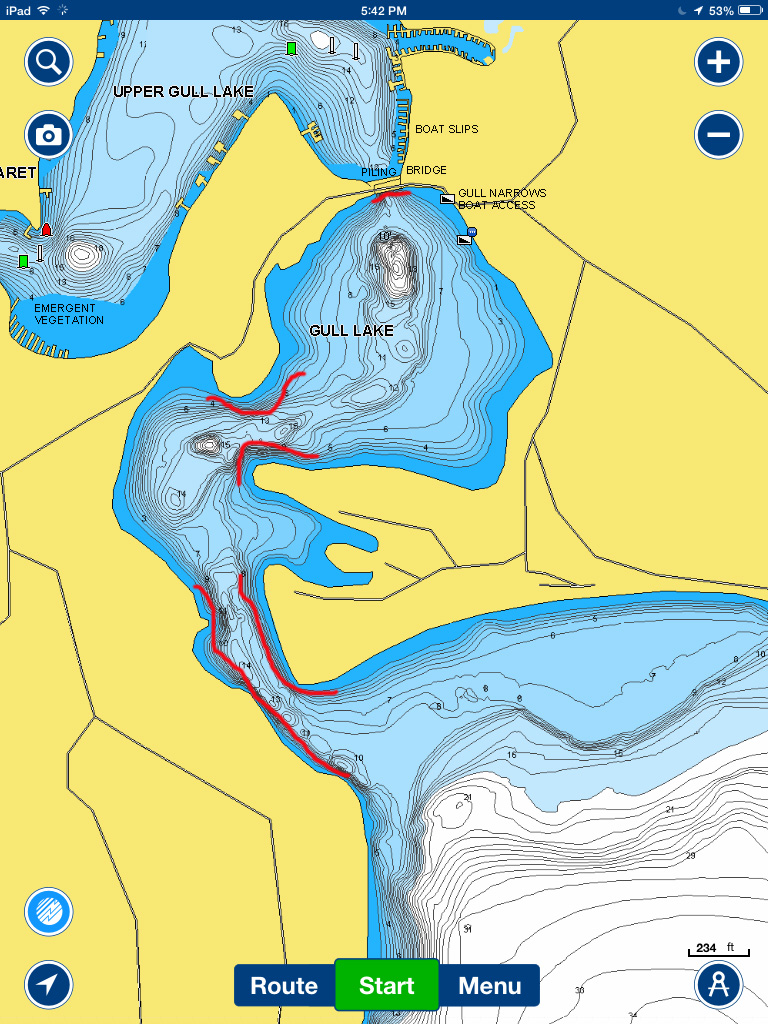 3. The Bow Tie Bars in the lake’s lower basin are rimmed with flats that taper out to around 10 feet, then drop off steeply. They become a go-to spot during the summer months. Try trolling or drifting a red Roach Hook or pink Super-Glo Attractor Hook, baited with a redtail chub, behind a 3/8-ounce Roach Walking Sinker. Focus on the zone from the edge of the weedline out to about 27 feet. If walleyes are in the weeds, go after them with a ¼-ounce Firetiger Weed-Weasel® Jig tipped with a fathead minnow. 4. Come September and the beginning of autumn, Dietman recommends focusing on the sharp breaklines where walleye tend to hold this time of year. Steep breaks all around the lake will hold fish, but good places to start include Center Bar Fall and Wilson Bay. Fish the edge of the weeds, from about 14 to 20 feet on the Center Bar. In Wilson Bay, the target area usually runs from 18 to 25 feet. Use a ¼- or 5/16-ounce Perch or Firetiger Puppet Minnow, fan casting with a jigging retrieve, or vertical jig areas where you see walleyes on sonar.