Lake of The Woods—Kenora, Ontario Some would say that the beautiful and bountiful northern section of Lake of the Woods is the centerpiece of Sunset Country in northwest Ontario. Roughly bounded by Kenora, Ontario, to the north, Monument Bay to the west, and across the Aulneau Peninsula to Whitefish Bay in the east, this section of the magnificent lake is peppered with islands, coves, and channels, and is better defined in square miles than expressed in surface acres or shoreline measurements.

“The best way to describe this part of Lake of the Woods is that it has more water than you could fish in a lifetime,” says fishing guide, tournament angler, and Team Northland member Jeff “Gussy” Gustafson.

He grew up in Kenora and spent a lifetime targeting walleyes, bass, crappies, lake trout, and more on these waters, and says it’s among the best places on the planet for freshwater fishing—year-round. 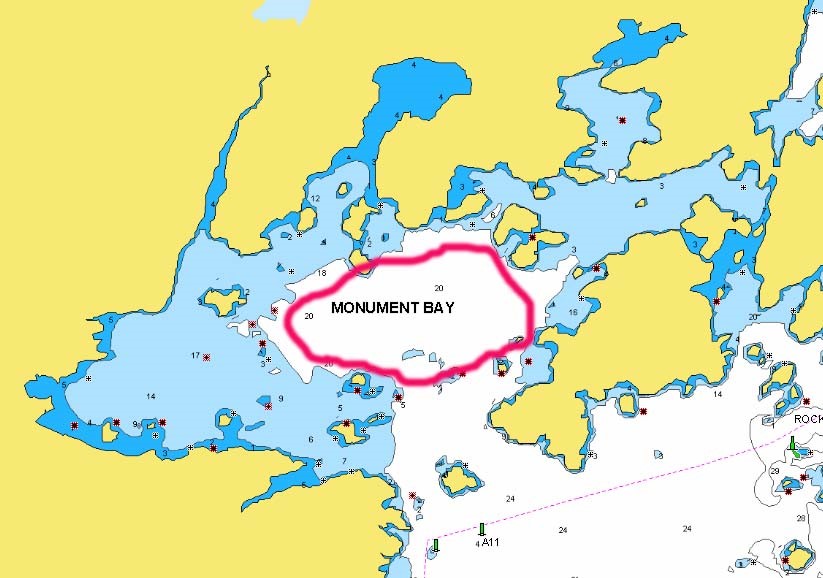 1. Winter fishing on northern Lake of the Woods is world-class, according to Gustafson. “In my opinion,” he says, “it’s the best place in the world to fish through the ice for walleyes, crappies, lake trout, and other species.” If you do make the trip, however, he warns that a snowmobile is a “must-have” piece of equipment. “There are some plowed roads, including a 40-mile stretch from Kenora to Monument Bay,” he says, “but during the mid-winter in nine out of 10 years, you’ll need a snow machine because you won’t be able to drive a truck anywhere off the plowed roads.” While walleyes are the primary focus of local hard-water anglers, what draws many visiting ice fishermen is the incredible lake trout and crappie fishing this time of year. If lakers are on your list, he suggests starting out in Ptarmigan Bay, west of the area’s central section. “Be aware, though, that the whole of Clearwater Bay (on the north side of Ptarmigan Bay) is closed to winter trout fishing,” he warns, “so be sure to stay within Ptarmigan.”

Water in this part of the lake is clear, he explains, so it’s best to fish early or late in the day when low-light conditions prevail. Look for lakers on the deep side of bluff walls or the steep-and-deep sides of points and submerged humps. “They like those drop-off areas where they can push baitfish (smelt and ciscoes) up against a ledge,” he says. Prime water depths generally range from 40 to 100 feet, but the fish could be anywhere in the water column.

“Lake trout are very active in the winter,” Gussy explains. “They like cold water, and they’ll be looking for food all winter. I’ve found that on the days they’re most aggressive, you’ll catch them higher in the water column. The more suspended they are, the more they’ll be on the hunt looking for baitfish.”

He recommends fishing a white 3½-inch soft plastic tube bait on a 3/8-ounce Inner-Tube® Jig, or a 4-inch Smelt Minnow on a 3/8-ounce Slurp!® Jig. “A white tube has put more lake trout on the ice than anything else,” he says, “but the Smelt Minnow is also a very good trout bait.” A third option is to jig a heavy Macho Minnow® or Buck-Shot® Rattle spoon.

Fish can see fairly well in the bay’s clear water and will come to investigate a dancing lure. “So, jig for a few minutes at one depth and if you don’t get a bite, reel up 10 feet and jig some more,” Gussy explains. “Keep doing that until you find out the depth the fish are cruising.” And don’t stay in one area too long, he adds. “If you don’t see action within, say, a half-hour—move on to the next spot.”

When it comes to winter walleyes, Gussy recommends pounding main-lake structures—humps, points, and flats anywhere you find them—from Ptarmigan Bay through the middle section, all the way to Whitefish Bay in the southeast. Where the water is a bit stained, as it is in the central zone, you’ll likely catch fish all day long. But where it’s clear, such as in Ptarmigan Bay, focus on the low-light periods early and late.

Look for humps and points that top out anywhere from 30 to 15 feet below the surface, then start fishing along the sides in 35 up to about 22 feet. Because there are so many options close to one another, Gussy doesn’t put a lot of time into searching for walleyes. Just start fishing, he says, and if things don’t heat up in 20 minutes or so, move to the next spot.

“The Buck-Shot® Spoon tipped with a minnow head is the No. 1 winter walleye lure as far as I’m concerned,” he says. “It’s a fantastic search bait, and I’ve caught thousands of walleyes on it.” He recommends going with one of the ultra-violet patterns, explaining that fish can see it more easily, both in stained water and under low-light conditions if you’re fishing clear water. Another local favorite, he says, is a 1/8- or ¼-ounce Whistler Jig® tipped with a minnow.

Lake of the Woods is also known for producing oversize black crappies, and anglers come from long distances to target them through the ice. “There are a lot of 14 inchers,” the angler says, “and you can see 15s and the occasional 16 if you can get on a school that hasn’t been fished too hard.”

“Look for deep basins in inside the bays; places where it’s 25 to 35 feet deep and fairly close to shore,” he says. “They’ll really congregate in those holes.” Monument Bay in the southwest section is a good place to start, but it’s not the only spot to look for crappies. “Anglers should check the whole Monument Bay area,” he says. “There are 6 or 7 miles of pretty good country down there.”

By far, Gustafson’s favorite winter crappie set-up is a 1/16-ounce Bro Bug Spoon, especially in pink and red, tipped with a small piece of soft plastic, such as an Impulse® Skeleton Minnow or Bloodworm. Another option for active crappies is a No. 2 Puppet Minnow, but on days when the fish are looking for a finesse presentation, go to a small jig-and-plastic combo, such as a Scud Bug or Water Flea.

The key here, he says, is to keep moving until you locate fish. “Look for crappies suspended slightly off the bottom,” he says. “I generally don’t start fishing until I’ve marked them with my sonar equipment.” 2. Most years ice-out occurs in late April or early May, and that’s when smallmouth fishing hits its peak. “There are a lot of days when you catch more than 100 smallies pretty easily in the shallow bays,” he says. White Partridge Bay, attached to Clearwater Bay in the northwest, as well as Snake Bay, part of Whitefish Bay in the southeast section, are two hotspots for early smallmouths. Search for fish in the very backs of the bays with a suspending jerkbait, says Gustafson. “Once you find fish, zero in on them with a weightless, wacky-rigged soft plastic stickbait. They haven’t eaten much all winter, and they’ll be in the mood to fill their bellies.”

Crappie and walleye action moves to warmer shallow water in the back bays this time of year, too. Search the shallows in the Monument Bay area where crappies congregated in the winter. If the east side of the lake is more convenient, try Witch Bay, a long narrow bay attached to Andrew Bay. Use a white 1/16-ounce Gypsi Jig®, or a Fire-Fly Jig tipped with a small piece of soft plastic under a Lite-Bite Bobber. “Look for pencil reeds and cast to any type of cover—trees, logs, beaver houses—that holds heat. Keep pitching into the holes in the cover until you find crappies.” Walleye anglers highlight the third Saturday in May on their calendars because it marks the season opener for this coveted gamefish. It’s time to “think shallow,” says Gustafson, and the Big Narrows area—an island-studded channel dominated by Big Narrows and Ferris islands—features a wealth of shallow structure and moving water.

The fishing is straightforward. Tie on a Fire-Ball® Jig of a size that allows you to reach the bottom and maintain contact in the depth and current you’re fishing. Tip it with a live minnow and jig vertically, or fan cast, depending on water depth. “Generally the target zone is fairly wide,” the angler says. “You can find fish in anywhere from about 6 to 20 feet of water. There will be numbers of eater-size walleyes, with a good mix of big fish.” 3. Around mid-June walleyes, crappies and bass begin to go into their summer patterns. Plus, muskie hunters start to ramp up as the season for this prestigious predator opens on the third Saturday. “The quality of Lake of the Woods muskies is amazing,” Gustafson says. “There are plenty of giants out there; you have a real shot at catching a 50-plus-inch fish every day.” Muskies are coming off the spawn at this time, and relate to weedbeds and shallow rock piles. “There’s a lot of early muskie water and a good population of fish within 5 miles of Kenora, but the south side of Coney Island is an excellent place to start.” Cast blade baits—a Reed Runner Magnum Spinnerbait —to rocks and weeds in 5 to 10 feet of water.

In mid-July, muskies tend to move to main-lake reefs and shoals. “Then you can mix it up,” says Gustafson. “I throw a variety of topwaters, big swimbaits, and blade baits.”

Mid-summer is the time to chase largemouth bass as well, according to the angler, and just about any shallow weedy bay will hold fish. “As a starting point, try Lobstick Bay on the northeast corner of Whitefish Bay,” he says. “Cast a 5/8-ounce black-and-blue Jungle Jig® tipped with a plastic chunk into the reeds, lily pads or trees. They’ll hang around any type of cover.”

Just about every main-lake hump will hold walleyes during the summer, and you can catch them by nearly any means you like—bottom bouncers and rigs, crankbaits, etc. But the most efficient method is a jig-and-leech, the angler says. “Target depths in the 22- to 35-foot range and you’ll catch fish.”

4. September and October bring out the best in everything, according to Gustafson. “In the fall, fishing is just good for everything,” he says. “A lot of anglers come up for the muskie fishing, knowing the predators will be chasing spawning ciscoes and whitefish around in the current areas.”

He suggests trolling big minnow-imitating crankbaits or vertical jigging muskie-size plastic baits in the Big Narrows area. “Fish anywhere from 8 to 20 feet, and in deeper water look for baitfish with your sonar.”

Late-season walleyes like the same type of spots, so look for them in Big Narrows, too. Another area is south of Gun Club Island on the north end near Kenora. Gustafson suggests drifting through the channels in 25 to 35 feet of water using a ¼-ounce Fire-Ball® or RZ jig tipped with live bait, or a Slurp!® Jig-and-Smelt Minnow.

By this time crappies are thinking about wintering areas; look for them in the same spots you’d expect to find them when ice fishing.