Spanning the border between Ontario and Minnesota, Rainy Lake is a 220,000-plus-acre remnant of former glacial Lake Agassiz, which during the glacial period covered more surface area than all of the modern Great Lakes combined.

Covering nearly 360 square miles, about 70% of which lies within Ontario’s borders, the lake forms an L-shape and is studded with more than 2,000 islands. The base of the “L,” known as the South Arm, runs roughly from Kettle Falls, MN, to International Falls, MN/Fort Frances, ONT, and forms the state/provincial boundary. Here the waters are tannic stained and tend to warm slightly faster in the spring than the clearer waters of the North Arm and Red Gut Bay area.

Angling promoter, educator, and Team Northland member Travis Peterson has extensive experience fishing Rainy Lake on both sides of the border and says that though its size is immense and structure is plentiful, anglers should keep in mind that a lot of the areas fish similarly. For example, he says, “Walleyes generally do the same thing on different parts of the lake during the same time of year.”

Consequently, the spots outlined are simply starting points; savvy anglers will use what they learn here to explore unmarked sections and areas, and expand their overall knowledge of the big lake. American anglers who do want to fish Canadian waters, he cautions, should first become familiar with the rules that govern crossing the border as well as Ontario fishing regulations as seasons, as well as bag and size limits, vary from area to area, and from those on the U.S. side.

1. Parts of Rainy Lake are so remote that, during the winter, they can only be accessed by snowmobile, or perhaps a tracked ATV. This isn’t the case along with parts of the southern shoreline from International Falls to Voyageurs National Park, however, as ordinarily there are plowed roads and well-used trails available. “You’ll usually have a better chance for easier travel closer to town and around the Voyageurs Park Visitor Center,” explains Peterson.

Still, it’s critical that ice anglers exercise good judgment; the area is pocked with islands and narrows where moving water means thinner ice. And the only way to stay truly safe is to avoid areas that look suspicious or sketchy, whether a trail exists or not. 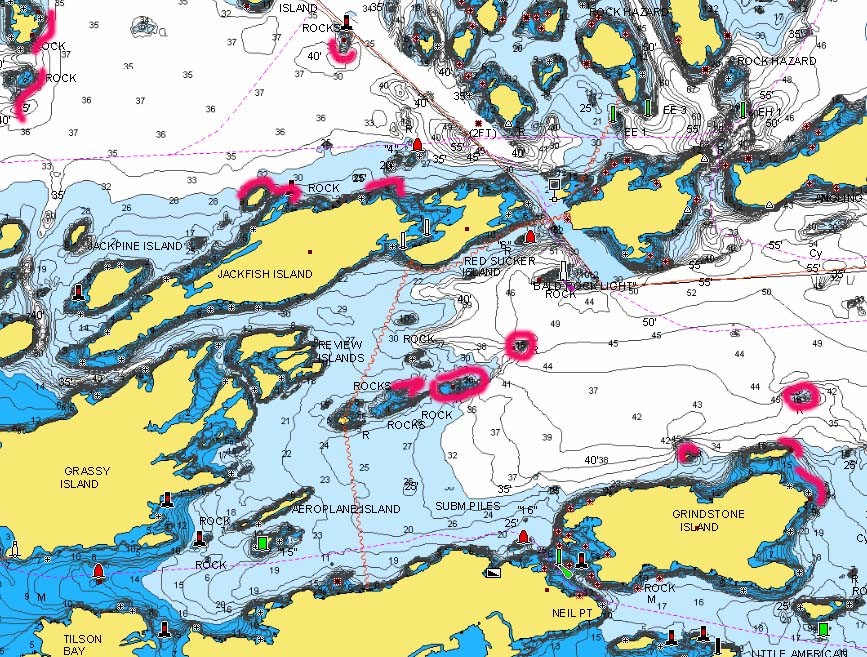 While walleye fishing occurs near International Falls, Peterson suggests starting your search a little farther east. “Waters around the islands that guard the south shore of the lake can be very good, and I’d spend time there initially,” he says. “Get on the north sides of Grindstone Island at the mouth of Black Bay, or north of Jackfish Island to the northwest—areas of the islands that face the deeper basins. Work the perimeters of prominent points, reefs, and isolated humps from about 18 to 30 feet during the day, and move shallower as evening approaches.”

The best approach is to drill numerous holes around the structure, traversing a range of depths, then hole-hop, fishing quickly with a Buck-Shot® Rattle or a Buck-Shot® Flutter spoon. “You can tip the spoon with a piece of a Smelt Minnow, or part of a real minnow,” he says. “But when the walleyes are aggressive, you often don’t have to use any bait at all.

“Reefs that top out anywhere from 25 to 10 feet will be the best, and the key is to keep moving around. Punch a lot of holes, and move to the next reef if you don’t find fish. The area is quite a maze—and it’s huge. You could fish around Jackfish Island all winter long, in fact.”

Crappies are also highly sought by Rainy Lake ice anglers, and Peterson suggests the mouth of Black Bay is a solid place to begin looking for them. “Don’t go too far back into the Bay,” he says. “Most anglers will be just south of Grindstone Island.”

Anglers targeting big northern pike often set up here as well. If you hanker to catch these toothy predators, try fishing a dead smelt on a Quick-Strike Predator Rig under a tip-up. While this area is fairly easy to reach, adventurous anglers may want to head for Rainy’s expansive Red Gut Bay. “It’s probably the best-known crappie area, and I’d head there, specifically the Cliff Narrows area if I was focused on catching those fish,” he says, “but it takes some doing to get there. To reach the public boat landing on Crowrock Inlet, you drive east out of Fort Frances on the Trans-Canada Highway (11) and turn north on ON-502.”

From the Crowrock Landing, it’s a long snowmobile ride past Porter Inlet to Cliff Narrows. Here again, use caution and common sense. Check with local sources, or online chatrooms, regarding ice conditions and where and when the fish are biting. Likewise, local sources may be able to point you toward private access points that are closer to where you want to fish.

Fish the typical array of crappie-appropriate jigs, plastics, and baits, but don’t hesitate to break away from the norm. Try jigging a Size 2 Puppet® Minnow or a 1/8-ounce Rippin’ Shad aggressively to call crappies in. If they’re reluctant to hit, finesse them with jigs.

2. On average, ice leaves Rainy Lake by the end of April or the first part of May, and anglers on either side of the border can target bass, pike, and crappies during this time. Gamefish of all types haunt the warming shallows, so look for fish in back bays and protected areas. Grindstone and Red Gut are still good for crappies now, though there are certainly other areas that produce slabs.

Walleye seasons on both sides of the border open later in May (check state and provincial regulations for exact dates), and that’s when a jig-and-minnow combo is hard to beat. Peterson recommends looking for areas that feature a little bit of current, or where the wind is blowing into an island or point. “I like to hop a jig around points and reefs that come up fairly shallow,” he says. “In 5 to 10 feet of water, where there’s little wind, I’ll go with a 1/16-ounce lead head, and tie on a 1/8-ounce jig if it’s blowing or I want to fish deeper.” Try a Fire-Ball® Jig and live minnow, or an RZ or Slurp!® jig with a Smelt Minnow. There are countless places where you can catch early-season walleyes, but if you’re new to Rainy, Peterson suggests starting at Brule Narrows. “You’ll have a lot of company, but there is a lot of structure to fish.”

Pay close attention to your sonar screen, GPS map, and navigational buoys in this area, he warns, as it is peppered with shallow rocks. The state/provincial border runs through the narrows as well, so make sure you stay within legal waters.

This bite typically holds until about the middle of June, though it’s more productive to focus fishing efforts on deeper structure. As July approaches many of the walleyes begin to transition to summer areas—mid-lake humps and reefs.

June is also prime time for smallmouth bass, according to the angler. “Go into the coves and look for baseball- to bowling ball-size rock, and if you can find gravel where they would have spawned, so much the better.”

Early on, he says, fish the very backs of the rocky coves; as the season progresses, and focus on shorelines closer to the main basin. “Of all the lures that will catch smallmouths, a lead head jig and curly-tail grub is still the best overall bait on Rainy Lake,” he says.

He recommends tying on a 1/8-ounce Slurp!® or RZ jig, tipping it with a 3-inch Impulse® Swim’n Grub, and making steady retrieves a foot or two under the surface over rocks in 3 to 5 feet of water.

Adding that smallmouths tend to favor smaller lures this time of year, “the 2¾-inch green pumpkin Fatty Tube is another excellent option as is a 1/8-ounce Buck-A-Roo® Jig, especially in a crawfish or silver shiner pattern.”

Fish the same areas through summer, but as the season progresses be sure to increase lure size. “A lot of people reserve spinnerbaits for largemouths,” the angler says, “but these smallies love a ¼- or 3/8-ounce Reed-Runner Spinnerbait.

Anglers can choose from literally hundreds, perhaps thousands, of places to fish for smallmouth bass on Rainy, but Peterson says the North Arm is most noted for big fish.

By July many walleyes, and most walleye fishermen, change their focus to main-lake humps. “Some fish stay shallow all summer, where they can find vegetation, but anglers find that fishing the deeper reefs is a lot simpler.” Begin your fishing on the reefs near the Fox Islands, he suggests, but go ahead and branch out to other likely-looking reefs, too. “Probably the most effective technique is slow-trolling a bottom-bouncer rig around the reefs,” he says. “You can pick your way around structure and thoroughly work an area.”

He recommends pulling a nightcrawler on a Walleye Crawler Hauler on a fluorocarbon leader behind a 1-ounce Rock-Runner® Bottom Bouncer. “Walleyes can’t resist the way a ’crawler rolls on that hook,” he says. “Keep the line as vertical as possible; it shouldn’t enter the water at anything less than 45 degrees. And the bottom bouncer wire should always be scraping or ticking the rocks. It’s also not the time to use a rod holder. Keep the rod in your hand and be ready to let out or retrieve line as the depth changes.”

Walleyes on the reefs are easy to pick up on sonar and you shouldn’t have to start fishing until you find some. Even so, Peterson recommends picking an area apart before considering a move. “If you haven’t caught a walleye, it’s not because the fish aren’t there; you just haven’t found the right depth, yet.”

Along with the Fox Islands, Peterson suggests fishing summer walleyes on the reefs between Soldier Point and Shelland Island east of Brule Narrows, as well as the reefs near Reef Point in the North Arm. “There are a lot of 25- to 30-inch walleyes in that neck of the woods, and the North Arm is one of the places you’re most likely to catch a 10 pounder,” he says.

3. From September into October, Peterson recommends fishing the same humps of reefs, as well as other similar structures. “Mark fish with sonar and drop a jig straight down on them; this time of year you’re as likely to catch a smallmouth as a walleye, and you could hook a big pike.”

Stick with soft plastics, he says, either a 4-inch Smelt Minnow or a 5-inch Impulse Smelt Minnow on a Slurp!® Jig Head. “They’re tailor-made for plastic artificials.”

Rainy Lake is also known for its trophy-class muskies, and anglers can start pursuing them in June. Fall, however, is a special time, especially in Red Gut Bay. “Muskie anglers come from all over to fish Red Gut in the fall,” says Peterson. “Topwaters are good this time of year, but it’s always hard to beat an in-line spinner.”