The author landed this slab crappie. The fish fell for a Gypsi Jig suspended next cattails on a spring afternoon.

Each spring, crappies get much attention among anglers across the United States and Canada. Crappies have a broad range and are in fact one of the most popular North American species of gamefish. As early-season crappies move shallow, seeking warm water, backwater areas become key. A common thread among some of the best spring crappie haunts is the presence of cattails.

Fish relate to “stuff” in the water all year for shade and ambush cover. Wood cover in the form of fallen trees, logs, and brush are popular targets. However, in spring, vertical stands of dead cattails are prime crappie holding cover for a different reason.

The Thermal Factor
As the snow melts each spring, I observe the heat drawing effect of dark colored structures as well as that of vertical, skyward reaching structures. Blacktop roads and parking lots are snow-free first. A similar effect occurs with regard to water temperature within a body of water. Areas with a dark bottom composition warm up first. Every year, the first bare ground in my yard is that which surrounds a few large red pines. Likewise, aquatic vegetation draws heat from the sun and can warm the adjacent water by a couple of degrees. Dead cattail stalks and leaves have a significant effect, wherever present. And . . . they typically grow in shallow, soft, dark bottom areas! 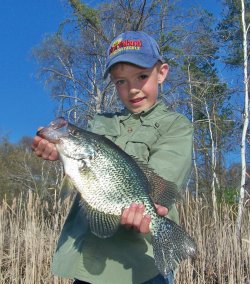 Cattails are magnets for spring slabs. Jace Peterson caught this sixteen inch spring crappie on a Fire-FlyJig suspended below a Lite-Bite Slip Bobber

The shallow spring crappie bite is almost always best on sunny days. Also, the mid to late afternoon time period is generally most productive, when this warming effect has had ample time to take play out. Each night as darkness arrives, the temperature difference between water immediately adjacent to cattails and water a few yards away is erased. But, each morning, that temperature difference slowly develops again. While a couple of degrees may seem minimal, it can be the key to spring slab success. Crappies that may roam around a silt-laden bay during the night and early morning will pull tight to cattail stands in the afternoon.

Pre-Spawn Presentations
When the first wave of crappies reaches the shallows each spring, their metabolism is just starting to increase. Slow presentations are best. It’s hard to beat a slip-bobber set-up with a small jig suspended below. The Northland Fire-Fly Jig will often tempt slabs. The fly imitator generally needs no bait added. Another lure that needs no bait is a Slurpies Panfish Tube. When presenting a minnow, the Gypsi-Jig® is better suited. In either case, getting the bait right up next to cattail stands is critical. Crappies may not leave their small zone of comfort. If a slight breeze is blowing into the cover, it can be employed to float the rig in tight. It’s also important to use the smallest float needed, as first-wave crappies can be tentative and wary.

As metabolism increases, crappies become more active. Eventually, the strike-zone will increase in size, as they become more willing to chase moving baits. Casting and retrieving small jigs with soft plastic swimming-tails can be added to the crappie catching arsenal. Northland’s Thumper Crappie King and Mimic Minnow Spin are two dynamite lures for casting. Both incorporate spinner blades that add flash and also allow for a slower retrieve. Again, working these lures close to the cattails is paramount. Pitch them on light line, hold the rod tip-up at the 2 o’clock position and retrieve them just fast enough to keep them off the bottom.

For spring crappies, head for shallow dark bottom areas. Within these bays, coves, and river oxbows, the obvious fallen logs and scattered brush that surrounds beaver huts should not be ignored. However, during spring, cattails are crappie magnets. Cash in on the cattail/crappie connection this spring!

Cat Migration
Until the late 1800’s, cattails were isolated to coastal wetlands along the north Atlantic seaboard, Louisiana, and California. However, they began to spread to the Great Lakes region late in the 19th century, via canals, road ditches, and other changes to the landscape. Cattails did not reach Wisconsin until about 1920. During the past 60 years, cattails have obviously spread quickly. They are now the dominant wetland plant in many parts of Minnesota and the Dakotas. In many areas, they have become more abundant than bulrushes.