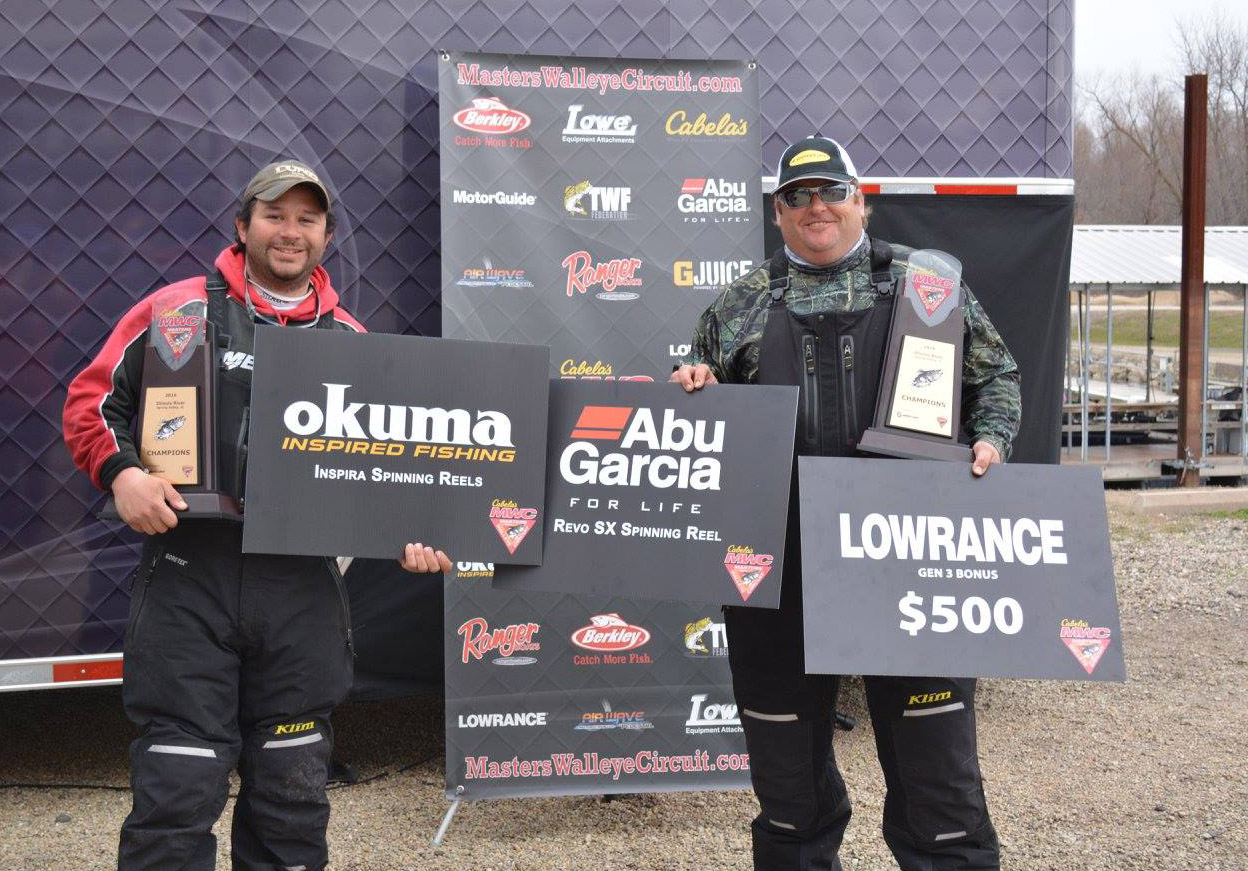 Northland Fishing Tackle’s iconic Gum-Drop Floater has been raising anglers’ baits into the strike zone for years, and this past weekend, it helped lift Joe Perez and Troy Tregoning into the winner’s circle at the Cabela’s Masters Walleye Circuit’s season opener on the Illinois River at Spring Valley, Illinois.

Held on the Illinois River out of Spring Valley, the event pitted 88 two-person teams from across the Midwest against one another on March 18-19. Teams were allowed to weigh their best 5 walleyes or saugers each day in their quest for a share of thousands in cash and prizes.

While the Illinois River had been “on fire” producing banner catches just a couple of weeks before the event, when rains raised the water level and muddied the river, anglers found fish hard to come by. Many of the teams zeroed and only six limits were recorded during the tournament.

The river offers a variety of fishing locations, from main-channel edges to shoreline eddies. With water temps hovering around the 50-degree mark, Perez and Tregoning targeted pre-spawn walleyes in less than 5 feet of water.

“We found a rocky rip-rap area that offered the perfect storm of current and baitfish,” said Perez.
To catch the hungry ’eyes prowling the murky waters around their boat, the team pitched and dragged jigs and floater rigs through the relatively small area.

“Quarter to 5/16-ounce jigs and Northland Gum-Drop Floaters were our top presentations,” he reported, noting that productive tippings included nightcrawlers and minnows. Jigs were also dressed with soft-plastic baits.
“Casting and slowly reeling the jigs and rigs along the bottom worked the best,” he added.

Perez and Tregoning, both of Spring Valley, sacked a 5-fish limit weighing 13 pounds, 1 ounce on day one of the two-day event to land in second place. They vaulted to first on day two with two fish weighing 6 pounds, 11 ounces for a 19-pound, 12-ounce total.

For their efforts, they collected the $11,650 first-place cash payout, plus more than $800 in sponsor bonuses and a $1,000 Cabela’s National Team Championship Prize Package including paid entry into the 2017 NTC, travel stipend, team jerseys, and plaques. They also earned the title of Illinois State Walleye Champions.

Northland Gum-Drop Floater Rigs are available in three sizes and a rainbow of color combinations to help anglers catch more walleyes and saugers on lakes and rivers this spring, and remain deadly weapons throughout the open-water season.