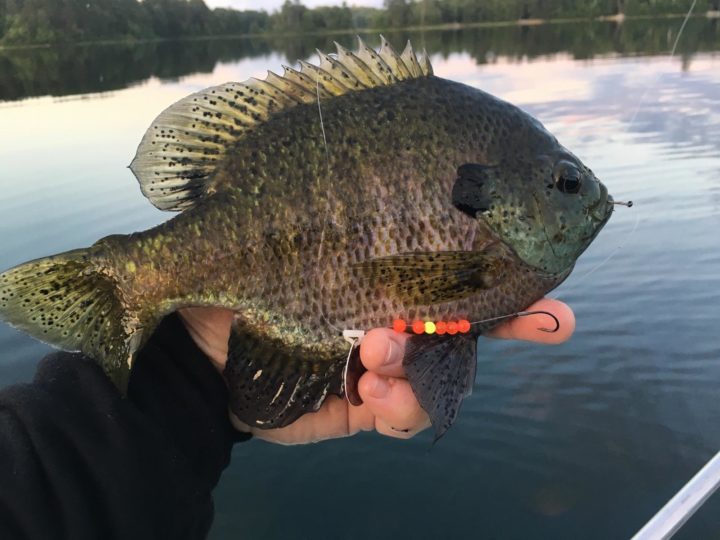 It’s pretty easy during the dog days of August and even into September, for bluegill and crappie anglers to lull themselves into a rut.  Fishing can be tough during the hot, sunny part of the day, and the productive times are usually limited to early and late.  Admittedly, if I’ve only got an hour or two to fish, I’ll take dawn or dusk as well.  Still, panfish are at their most active during the summer peak and will usually eat better than most species, especially if you put the right baits in the right places.

The fact that the very most active periods are early and late actually presents somewhat of a problem.  If they’re only fired up during low-light, how do you find fish to target during these periods without spending all of your time looking?  For me, it’s with a trolling approach that’s effective during all times of the day, such that you can pinpoint locations of panfish and catch them the way you want to in the early morning or evening.

As a kid running the boat for the first time, I remember being frustrated with the number of crappies we caught pulling spinners on deep weedlines and breaks for walleyes.  Any walleye angler that pulls crawlers will tell you stories about bruiser gills too that inhabit many of the same spaces.  Panfish weren’t “cool,” and bigger, rarer fish-like ‘eyes certainly were.  A small spinner rig with a crawler pulled off of weed edges can be so deadly for gills, that it has given rise to the use of plastics for many walleye folks that are sick of constantly re-rigging bait.  Later in life, I’d be reminded that casting for panfish, with or without live bait, wasn’t always as effective as pulling spinners at a constant pace over variable cover, depths, and locations.

So it was a few years ago that I re-discovered, remembered, or otherwise re-visited pulling spinners for crappies and gills on account of a guy we were fishing with who couldn’t keep them off his line.  It’s been a go-to from that day and many others since.  The rig was simple as I remembered it; 1/8 – ¼ oz. bullet-nose sinker above the spinner leader’s swivel, back to a smaller hook or crawler harness tipped with a smaller section of worm or other live bait.  Bigger hooks up to size #6 or #4 mean fewer hookups and more bait thieves, but overall larger average fish.  Anything size #8 or smaller means more fish hooked up so long as you don’t put too big a chunk of crawler on.  You choose whichever suits you best.

Blade sizes and colors don’t seem to matter as much, provided they aren’t oversized enough to attract more predators and less panfish than they were worth.  Generally speaking, bright colors perform well in murky water and more natural colors do well in clear, but the vibration of a Colorado blade especially I feel does most of the work.  Butterfly Blade Spinners have made the technique even more deadly as they offer more flexibility in the speed of presentation.  Slow down to offer nipping fish an easier target, or speed up to clear of weeds or other hazards; it doesn’t matter as they spin at 0.25mph as they do at 2mph plus.  It also means that if you’re snagged or busy unhooking fish, all lines are still performing well for you.

The presentation part of it is equally simple.  Find a weedline, set your trolling motor anywhere from 0.5 mph or higher, and follow a contour.  If the wind is conducive to a good weedline drift, that works well too.  Literally, this technique is all about dragging around until you get a bite and refining from there.  Along the way, depending on the lake, you’ll catch walleyes, bass, and certainly pike mixed in, but the goal is finding crappies and gills to target however you please.  Or to continue to pull spinners on.

Don’t forget the inside weedline either.  In many systems, especially predator-rich ones, the outside of any weedline can be a scary place.  Cooler water exists for bigger fish that prefer it, and the perfect ambush curtain is drawn to cut down smaller prey species.  That’s why the inside gets little attention, though you’ll have to downsize your weight, and depending on clarity, even consider a panfish planer board.  Without complicating an easy technique too much, I’d likely only consider this in gin-clear water when after trophy crappies.  Gills don’t seem to care as much about you driving over them with the electric motor anyway.

Similarly, don’t avoid the sparse cabbage edges.  These rigs are surprisingly weedless, and both cabbage and coontail can be exactly where you want to target.  It tends to be where you’ll catch the majority of your walleyes mixed in as well.  Along the way, you’ll likely learn a great deal about the layout of weed structure, as well as bottom content changes that are fish magnets during all times of the year.  Don’t hesitate to go heavier on the weight either if you’re trying to focus on the depths during mid-day.  Truth be told, many of the crappies I’ve caught over the years this way have been on bottom bouncer rigs tight to the bottom.  My guess is that many of these fish were focusing on bloodworms and other invertebrates along the base of the weedline and into the mud.

Cover some water and take advantage of aggressive, summer spinner fish.  Find them before evening, and you just might find that the catching is as good during the daytime as it is during primetime.