Northland Tackle Pro-Staffer Steve Kuchenberg provided an update on the Spring Walleye bite on Southern Green Bay and the tributaries.

The Wisconsin fishing season opener is always the first Saturday in May and is only a little over two weeks away. Lots of folks have been out targeting Walleye in the rivers and shallows of Green Bay looking for Pre-Spawn fish, but as the water temperatures have climbed into the upper 40s on Green Bay and into the 50s in the rivers, the spawn is winding down. Suckers are taking the place of the Walleye as they transition back into Green Bay. Typically, the Fox River in Green Bay is the first river for the spawn to occur and the trend works its way north to the Oconto, Peshtigo, and lastly the Menominee river, with each one being about 10-14days behind the previous.

As the spawning run concludes the Walleye are moving from the river back into Green Bay so Anglers have been targeting the river mouths and nearby shallow water along shorelines.

The good news is that Post-Spawn fish are hungry and often feed quite aggressively.

Two key things to pay attention to are water clarity and temperature this time of year. Dirty water gives fish some protection and it also warms faster as it absorbs more sunlight. So Kuchenberg recommends looking for water with 2’-3’ of visibility vs crystal clear water and also look for pockets of water that might be 5 to 8 degrees warmer than surrounding areas. He also said, don’t be afraid to fish shallow, as in 3’-6’ feet of water. When fishing that shallow pay attention to fishing pressure as well. Too many anglers in a small area will spook the fish or shut them down so don’t be afraid to move off to where no one else is and give it a try. 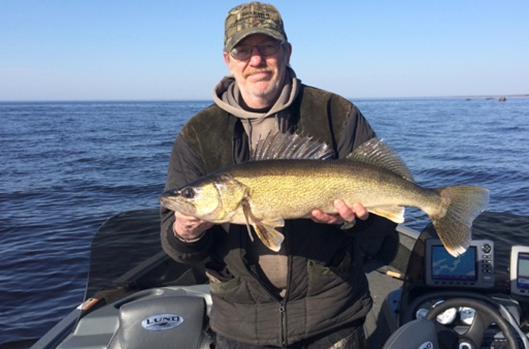 It’s hard to beat the feeling of a Post-Spawn Slob O’Saurus whacking your bait and because the fish are concentrated in relatively shallow water this time of year, it’s a great time to hook into a Green Bay giant. Typical baits to use when casting are soft plastics like the Northland Impulse Paddle Shad or a Lipless Crankbait such as the Rippin Shad. An aggressive technique like Rip Jigging works best and you’ll want to keep your line tight while the bait sinks as the fish will often hit it in the fall. Steve prefers a medium-duty spinning rod such as the St. Croix Avid Series with a fast or x-fast tip to handle the big fish often caught on Green Bay.

Target the river mouths, creek outlets, or pockets of stained water that have a little more temperature to them than the surrounding area.

Trolling this time of year is also highly effective as you can cover more water and increase your chances of finding an active pod of fish. The Western shore of Green Bay is mostly sand and it drops off slowly, so pulling some Off Shore Tackle Planer boards to cover more water can be a great way to locate fish. Once you find a pod of fish, then switch to casting if you prefer. Most anglers tend to stick to crankbaits early in the season and simply slow the presentation speed down a bit, but Kuchenberg isn’t afraid to pull some meat as well as he believes that the scent of a crawler helps entice the bite. Steve said he will target shallow water and often just use a 1/4oz split shot to get the crawler harness down just a few feet and he likes to keep the speed at right around 1.0mph. Colorado baitfish blades in a size 6 are the preferred spinner blade of choice and purple is a great color to start with.

Whether you are fishing from shore, casting, or trolling from a boat springtime is a great time to get out and chase Walleye on Green Bay and its tributaries. To see more updates, follow Steve Kuchenberg on Facebook and Instagram, and best of luck on the water.