BEMIDJI, Minn. (December 1, 2022) – It’s not called “The Big Pond” for nothing. At just over 132,000 acres, it’s basically a turbulent circle with a variety of structures that hold walleyes in both numbers and size.

Although the lake continues to draw a lot of attention for its ever-changing regulations, DNR commentary, and general political discourse, fact is there are a lot of fish in the lake for anglers to pursue and a great, close destination to bring the entire family. Many resorts around the lake offer permanent hardhouse and sleeper rentals besides cabins.

Effective December 1, 2002, ice anglers can keep one walleye between 21- and 23-inches or one fish over 28 inches. The daily perch limit is 20 and possession limit is 40. As far as pike go, all fish over the 30-inch mark must be released with three pike under 30” allowed. Five tullibees are also allowed per day. Smallmouth bass continue to be catch-and-release only.

“Number one,” says Northland pro and respected fishing guide, Brad Hawthorne, “Mille Lacs is a massive lake that needs to be respected.” And, quite frankly, super-safety is required on any exceptionally large and shifting body of water.

“Ice anglers who go out on 3- or 4-inches of ice are stupid, plain and simple. Me, I don’t go out until there’s 5-inches of ice. Mille Lacs ice shifts a lot during early season, and it can be dangerous,” adds Hawthorne.
So, first on your list should be establishing safe ice travel routes toward the first break. Then, as the season progresses, you can start venturing out to historic offshore areas.

Once safe travel routes and fishing areas are discerned, Hawthorne takes to covering large expanses of water with only a couple holes. Using a combination of Humminbird MEGA 360 and Humminbird MEGA Live, he’s on the look-out for biomasses.

“That’s the difference between finding walleyes on small and large lakes,” says Hawthorne. “I must cover a lot of ground on Mille Lacs to find fish on a day-to-day basis. That’s where the technology really helps. With 360, I can look out 125 feet in every direction around one drilled hole. That helps me find structure, bottom transitions, soft-to-hard bottom transitions, and walleye pods. Once I’ve pinpointed a target, I simply pace off the distance in the given direction and drill another hole. That’s when I drop MEGA Live to help me learn how fish react to baits in real time,” says Hawthorne.

Although there are small walleye pods on large waters like Mille Lacs, what you’ll find most of the time is that a smaller pod is simply part of a larger school. There can be 20-30 yards between groups of two or three fish – but the entire school can span an eighth of a mile wide or more.

“That’s when I open the viewing angle on my electronics. Sometimes, Mille Lacs Lake walleyes are widely dispersed and other times the pods aren’t six inches apart. So, you’ve gotta know what you’re looking for. But chances are on Mille Lacs, you might be looking at a hundred to three hundred fish that are grouped up in smaller pods that extend a good distance from each other,” shares Hawthorne.

After 20 years of guiding on Mille Lacs, it’s easy for Hawthorne to find high-probability areas on any given day, but he always starts early-ice where he left things off in late-fall.

“Just because there’s ice over the top, it doesn’t mean that it’s harder to find fish. Fish are going to be in relatively the same areas they were late-fall. That’s my baseline for finding early-season walleyes. Four and Five Mile gravel on Mille Lacs hold a lot of fish year ‘round. But you can’t access it during early ice. But when the ice is safe enough, that area is usually on fire for two to three weeks,” notes Hawthorne.

He says the biggest mistake ice anglers make on Mille Lacs is they fish it like a thousand-acre lake. Visiting anglers go out, sit on hump in the middle, and complain that their success is marginal. And instead of really looking at what’s going on, they blame the lake.

Nothing could be further from the truth. There are thousands of catchable fish. You must fish differently from most waters.

“On the north end I start off on the first break. And on the east and southeast side, I concentrate on that 18- to 26-foot stuff. Bottom line is you’ve gotta find where they’re feeding. And they’re feeding constantly. A lot of anglers don’t realize that walleyes will keep eating with forage already in their mouth—even coming out their gills,” shares Hawthorne.

He adds that with the high population of walleyes on Mille Lacs, even if only 1% of those fish are active, if you’re fishing a school of 500 fish, you should be successful.

“As early ice progresses, we get into the meat and potatoes, like the mud flats which produce year after year. And as soon as you’re able to get out safely to those deeper areas, you’re going to find different species of minnow schools and walleyes feeding on multiple forage, whether that’s bugs, baitfish, perch, or eating their own. Cannibalism is a big thing that doesn’t get talked about. Walleyes will not hesitate to eat their own young-of-the-year,” says Hawthorne.

On any given day, the first thing you need to figure out is whether it’s going to be a hard-bottom or mud bite. From there, lay your day out. In the morning you might want to set up on rocks because walleyes are chasing small perch—and when the sun gets higher, life starts moving in the soft-bottom areas and walleyes will feed on emerging insects in the mud.

“Mille Lacs is the only lake I’ve fished where I can be using UV Pink at 1 pm and the next hour be using blue-silver. Colors don’t really lock into play like they do on Red Lake. But there are a few colors that work every day, like UV Pink, Silver Shiner, Hot Blue Chub, and Golden Perch. You’ve gotta have spoons in those four patterns,” says Hawthorne.

Hawthorne continues that there are days on Mille Lacs when walleyes are attracted to sound, feeding more by their lateral line, and other days when they’re visually keyed into flash.

But the best performer last winter, says Hawthorne, was Northland’s new Glass Buck-Shot Spoon, which he fished extensively before it’s official release to the market. 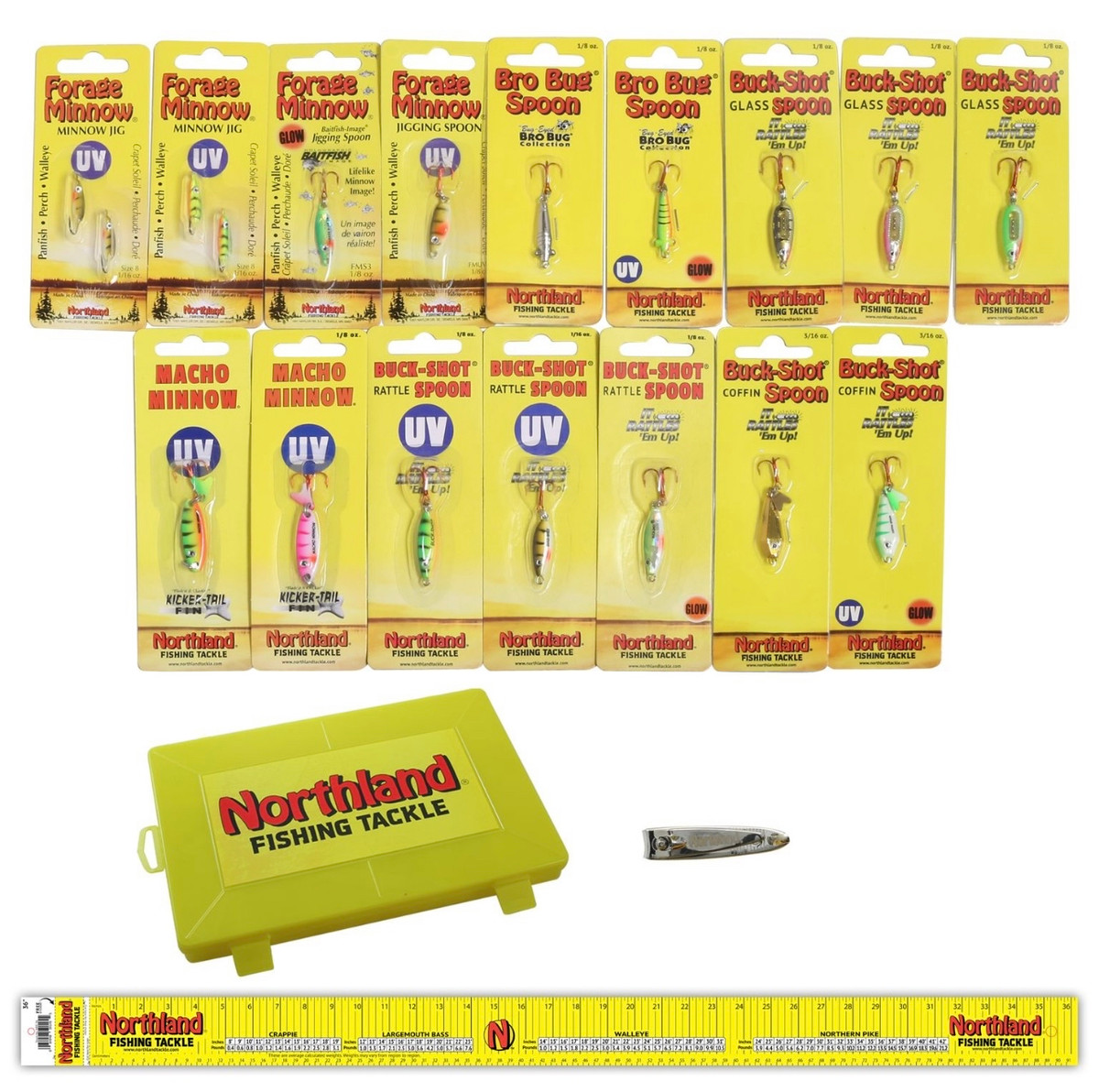 Everything you will need to have a great day on Mille Lacs this winter no matter what conditions you are faced with. Hand picked by Northland pros, this kit includes an assortment of not only the best colors, but also the best selection of profiles and actions proven to be successful not only on Mille Lacs but all clear bodies of water. “It hits on all cylinders—you’ve got shine, flash, a high-pitched rattle, and it’s one of the best encased lures ever designed. Anglers understand loud brass rattles, but when you get into glass rattles, you’re starting to emulate crawfish scratching bottom and other fish-attracting noises. I believe the pitch of rattle lures really matters. With the Glass Buck-Shot Spoon you’re beating a drum and walleyes are coming in to check it out. But what I experienced with the glass rattle is walleyes not only come into investigate, they eat it without any hesitation. It’s a whack-fest that really takes you by surprise,” says Hawthorne.

Hawthorne also likes that the Glass Buck-Shot Spoon is symmetrical on both sides, which walleyes observe when feeding on natural forage.

“As far as a spoon being good at calling in fish from a distance and being able to cover everything from clear waters to dark stain, it’s the best spoon out there. I think it’s the best damn rattle spoon ever made, period.”

In terms of must-have Glass Buck-Shot Rattle Spoon colors for Mille Lacs, Hawthorne’s top two last winter were Silver Shiner and Golden Perch patterns in 3/32- and 1/8-ounce. He opts for the larger ¼-ounce when fishing LOTW and Red. “If I stop in an area with Humminbird MEGA Live and find 20- to 30-fish, I always drop a set-line to give neutral to negative fish the opportunity to feed. Four to six anglers all fishing rattle spoons can spook those tentative biters. With a set-line and a jigging spoon, you’re covering all the bases.”

In terms of ideal Mille Lacs Lake rod and reel set-ups, Hawthorne has been using rods by Minnesota-based custom rod builder, Tuned Up Custom Rods for over a decade.

“I helped design Tuned-Up Power Precision rods when I was guiding on Upper Red Lake. I use the 30- or 32-inch model for inside a house and a 38-inch for fishing outside. I couple those with a size 1000 reel spooled with 6-pound fluorocarbon. That’s my system—and it’s proven itself day after day. And don’t forget a #12 barrel swivel placed a foot to 18-inches above the spoon,” offers Hawthorne.

And even if Mille Lacs isn’t on this winter’s hit list, Hawthorne’s observations and tips could very well apply to your chosen waters.