MINNEAPOLIS, Minn. (January 12, 2022) – He might not get around like he used to, but that doesn’t affect Neustrom’s ice fishing success. You see, decades of exploring and experimenting on the hardwater have given Northwoods gray beard Tom Neustrom an acute understanding of where fish are and what they’re doing throughout the calendar year. Frankly, the days of plugging hundreds of holes and hopping around the ice are behind him. Why? Because he doesn’t have to. Mostly, Neustrom lands on fish, winter and summer.

Come midwinter, that collective wisdom is channeled toward crappies. Truthfully, crappies are predictable critters, as long as you understand their habits, which Neustrom does. To that, Neustrom applies the “replication of successful situations and conditions” to whatever Ice Belt lake he chooses.

According to Neustrom, come midwinter, crappies are “locked down in spots and will be there until spring.” This isn’t the time to cut holes over transitional areas. Rather, locate those deep midwinter zones and get to know their most personal secrets.

In Neustrom country, northern Minnesota, he puts a bead on tapering, soft-bottomed basins in 20 to 35-feet of water. Of course, that depth range fluctuates depending on the lake. But, ultimately, you’re after pronounced basins with a soft substrate. The softness, says Neustrom, is revealed by the thickness of the bottom mark on your electronics. Thin equals soft.

“It’s all about the food,” says Neustrom. “Crappies are feeding on zooplankton and restless aquatic insects,” the immature forms of winged critters like mayflies and midges. “They only eat baitfish opportunistically.”

The bulk of the feeding activity occurs in the bottom ten percent of the water column. Crappies will rise with the zooplankton during lowlight levels and overnight, but during the day, expect to find them bellies to the floor or a foot or two off.

“Generally speaking,” says Neustrom, “the clearer the lake the more pronounced morning, evening and overnight bites.” To that point, he prefers daytime-bite lakes where crappies can be had all day. Those are the stained-to-darker-water lakes. In fact, crappies in colored water sometimes quit biting at or just before nightfall, so select your targets based on the window of time you intend to fish.

Neustrom also prefers lakes with multiple basin opportunities, not a single punchbowl. This affords the prospect of relocating if necessary while maintaining the midwinter formula. Moreover, the multiplicity tends to disperse fishing pressure.

Now, we’ve all read about complex jigging methods that include quivers, hops, freezes and even a somersault or two. Not that they don’t work, but Neustrom is pretty meat and potatoes. The veteran ice angler is more focused on finding productive spots with active fish, not, as he says, “turning your jig into a circus performer.”

With that in mind, he trusts proven baits and colors and presents them matter-of-factly. “Tungsten is the way to go,” says Neustrom. “The heavier baits get into the crappie zone quickly and keep tension on your line and rod for detecting bites.”

Neustrom puts his money on Northland’s Tungsten Mud Bug and Tungsten Gill Getter, varying weights according to depth. Ultimately, he wants just enough heft to keep that line tight. Color-wise, again, it’s all about replicating past successes. Oranges, yellows and greens are consistent performers. That means Tiger Beetle and Ladybug in both models. With that said, he always has glow at the ready.

Being quite carnivorous himself, Neustrom dresses his tungsten armaments with meat, either two waxworms or four grubs (Eurolarvae). Another example of rinse and repeat replication. Keep doing what works… until it doesn’t. 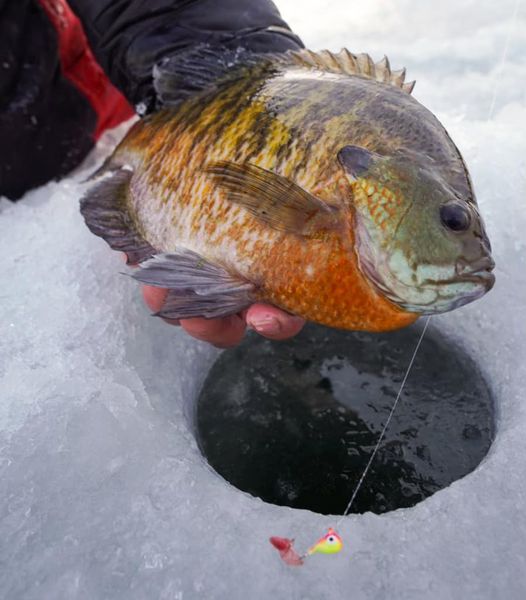 Back to his rudimentary but infinitely effective jigging technique… “I fish above them,” says Neustrom. “Just look at the position of their eyes. Crappies like to feed up. Don’t drop your bait into the school, draw them up. Just a lift and fall and maybe a twitch above the fish. Let it sit still every now and then, too. And when a red mark rises to strike, don’t move it. The good ones don’t chase, they eat.”

Neustrom’s rod loads up at the moment of truth, when the mark of the lure and fish become one. To that, “having sophisticated ice fishing tools is as critical as knowing where to fish.” In Neustrom’s world, it all starts with rod selection. That translates into premium St. Croix and Daiwa gear. His ace-in-the-hole for deep midwinter panfish is the 27”, medium-light, fast-action Tundra (SCT27MLF). He describes the rod as “deliberate,” having no need for anything longer. He says the Tundra has “great feel, a soft tip that loads well, but enough power to drive the hook home.” To the St. Croix Tundra, he attaches a petite and surprisingly affordable Daiwa QR 750. “It has a smooth drag and solid anti-reverse. Good as any $100 reel.”

In fact, Neustrom tested the QR750 a few years back with Daiwa engineers from Japan. They came seeking Neustrom’s insights on its freshwater performance. They left knowing it was going to be a walk-off ice-fishing homerun.

Pretty simple on the spooling side, too. Neustrom spins four-pound fluorocarbon on all his crappie crusades.

Don’t succumb to the midwinter blahs. For crappies, it’s all about the basics and the basin bite.