The fifth-largest of all the lakes in Minnesota, Lake Vermilion stretches about 40 miles from end-to-end and covers nearly 40,000 acres. Its two main basins, widely known as the Cook End (west) and Tower End (east) are separated by Oak Narrows, and each features abundant structure and cover where gamefish can spawn, feed, and grow.

The definition of a Canadian Shield Lake, Vermilion’s tannic-stained water is dominated by sand/gravel and rock/rubble shorelines that extend out to transition zones where the bottom turns muddy. More than 350 visible islands are interspersed with countless rocky offshore reefs and shoals that attract prey fish and predators alike. In short, Lake Vermilion is a one-in-a-million fishing destination that every angler should experience at least once, according to competitive fisherman and Team Northland Member Jamie Lindseth.

Walleyes are the most sought-after species, by far, and they’re protected by a 4-fish daily bag limit as well as an 18- to 26-inch slot limit that together keeps the overall population, and average size, at healthy levels. Muskies, too, are a prized quarry, and the status of their population offers any savvy angler a decent shot at catching a 50-plus inch.

Lake Vermilion is rich in structure, so while the areas Lindseth points out here are good starting spots, he recommends using them as a guide to identifying other fish-holding areas as well. Depending on the season and the day, you may not need to venture farther than these marked areas, but you can expand opportunities by expanding your range. 1. During the fall, narrows and pinch points become hotspots for walleyes because the predators are keyed to ambush spots where they can attack schools of baitfish in a confined area. Try fishing the mouth of Stuntz Bay in the lake’s Tower End, especially the north end of the hole at its mouth. Lindseth recommends a 1/8-ounce Fire-Ball® Jig in Bubblegum or Glow Watermelon tipped with a shiner, minnow, or Impulse® Smelt Minnow in water from 3- to 13-foot depths. Snap-jig the combo while moving the boat slowly along with the electric motor. Explore depths out to about 40 feet, but switch to a ¼-ounce jig head.

Farther west along the southern shoreline, try the mouth of Everett Bay as well as the waters around Jack Rabbit Island, using the tactics already mentioned. And don’t hesitate to explore similar structures—islands, narrows, and main-lake reefs—over the entire basin. Walleyes will be anywhere they can find a dependable food supply. Fall is also prime time for big muskies. Lindseth recommends fishing the string of main-basin reefs and shoals stretching from Potato Island to the northeast, using crankbaits, bucktails, and large soft plastics. Here again, Lake Vermilion boasts a healthy population of these large predators, including a better-than-average number of trophy-class fish, as well as a wealth of structure that holds baitfish, perch, and walleyes this time of year. Be prepared to scout and fish other likely areas. 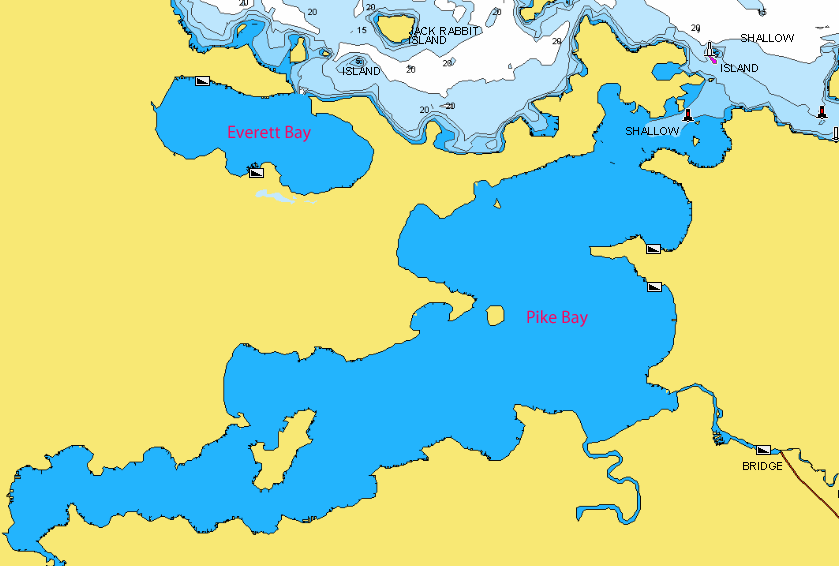 2. Massive Pike Bay is typically full of walleyes from the spawn through mid-June. The water is dark and shallow (8 feet maximum); the bottom is sandy, and walleyes are scattered throughout the bay. Lindseth suggests fan casting a shiner or Impulse® Smelt Minnow on a Fire-Ball® or RZ Jig using a slow to medium hopping or swimming retrieve.

Depending on the weather and spawning conditions in the spring, fisheries managers sometimes decide to close Pike Bay to early-season walleye fishing. Be sure to check local fishing regulations and abide by posted notices. If Pike Bay is off-limits, try the same technique in Stuntz Bay to the east and Everett Bay just to the west. 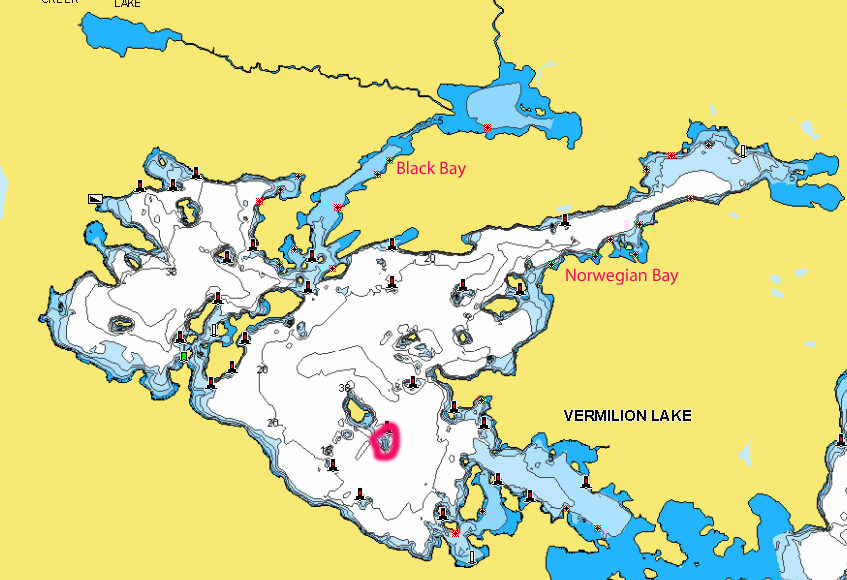 Oak Narrows separates the Cook End from the Tower End of the lake. While the Tower End typically holds higher numbers of fish, walleyes in Cook End tend to run larger, according to Lindseth. In the early season, shallow inlets and bays, such and Black and Norwegian bays, hold walleye, but Lindseth never rules out the deep-water bite this time of year. Look for walleyes at 30 feet and deeper near the reefs to the southeast of Center Island, and fish a shiner or soft plastic on a 1/16-ounce Fire-Ball® Jig. Lindseth prefers the lighter lead head because it falls more slowly and entices picky walleyes. 3. From mid-June through Labor Day Lindseth’s focus centers on Vermilion’s larger Tower End, and especially on breaklines that transition to a mud bottom. The transition that extends east from Cherry Island is among his favorite places to troll a Mr. Walleye® Crawler Hauler, baited with an air-inflated nightcrawler, behind a 4-ounce Rock-Runner® Bottom Bouncer.

“Go with hammered silver (Hex Nickle) or hammered gold (Hex Gold) blades,” he says. “They are absolutely the most productive patterns in this stained water, and keep the presentation fairly vertical—don’t let the line hit the surface at less than 45 degrees.”

Trolling crankbaits for suspended walleyes in the main basin is another summertime option. Pay attention to your sonar screen and look for walleyes, baitfish, or clouds of insects. Mid-summer muskies can be found near rocky reefs, a long the entrances to narrows, and over flats just about anywhere on Lake Vermilion. Lindseth suggests that anglers who are unfamiliar with the lake start their search on the flats west of Jack Rabbit Island, then branch out from there. Cast metal baits to shallower structures, or troll crankbaits, like the Rumble Beast to cover water.