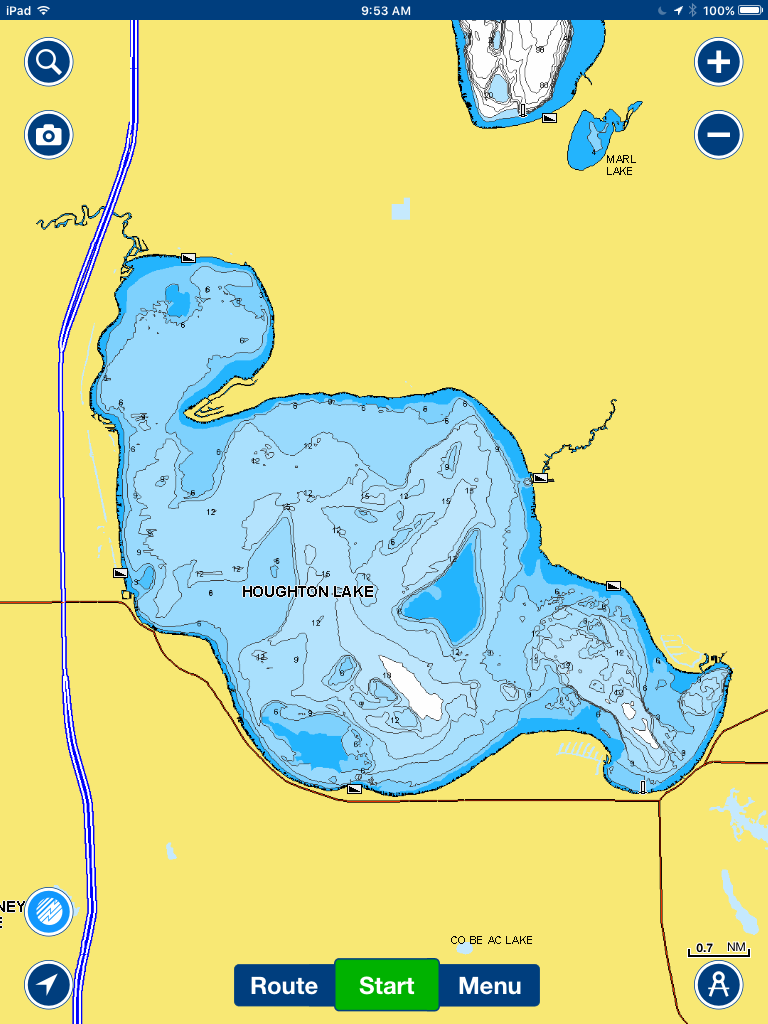 Lake Houghton, Michigan is a huge body of water in Roscommon County may rank No. 1 in size (more than 20,000 surface acres) among Michigan’s inland lakes, but it’s also among the shallowest, with a maximum depth of just more than 20 feet.

These characteristics make Houghton a perfect environment for aquatic vegetation and many species of gamefish, including walleyes, black bass, northern pike, and panfish—and therefore a popular destination for anglers of all types. The most successful fishermen, however, are those adept at fishing the weeds.

“With so little variation in depth and the dominance of weeds as cover, fishing strategies and tactics revolve around the progression of plant growth through the year,” explains Mark Martin, professional angler and Team Northland member. “And no matter what type of fish you’re after, you’re likely to catch a number of different species, especially northern pike, because they all relate to the weeds.” 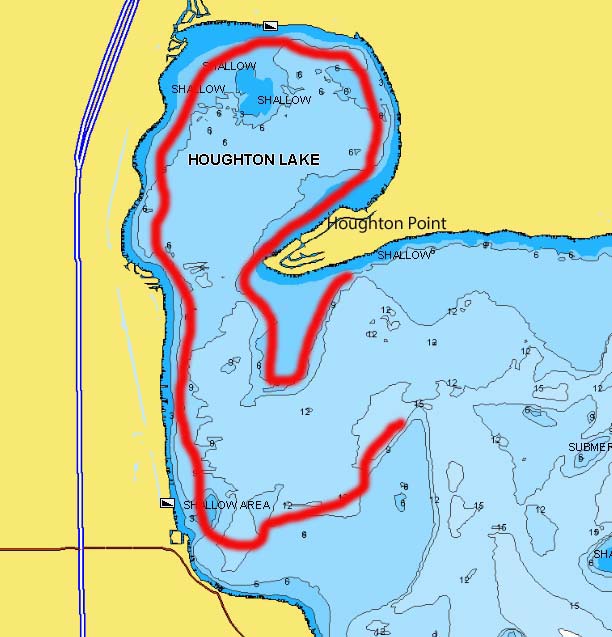 While Houghton holds pike that range close to 40 inches, the abundance of small fish means that walleye and bass anglers may incidentally catch 20 to 40 of them a day. The population is so high that fisheries biologists set the bag limit on Houghton at 5 pike per day—only one of which can measure 24 inches or longer—and anglers are encouraged to keep as many as legally possible.

During that early season, walleye anglers should focus on the newly emerging weeds along the shoreline, according to Martin. “You’ll run into milfoil, coontail, and cabbage weeds,” he says, “and walleyes will use them all—but cabbage is always the best.”

He recommends trolling single-hook-and minnow or a size 4 Gum-Drop Floater-and-minnow behind a bottom bouncer right through the young plants in 2 to 4 feet of water. “I use Slick-Stick bouncers because they slide through the vegetation without snagging,” he says, “and because the fish are easily spooked in the shallow water, in-line planer boards really make a difference.”

Each angler is allowed to fish two lines, so if there are two or three people in a boat, trolling can get messy. Martin uses bottom bouncers of varying weights—3/4 to 1½ ounces—on different lines to help keep them separated.

“When you come across an area where the weeds jut out abruptly to form sort of a point, fish it hard because walleyes tend to stack up in such places,” he adds. “You’ll also see that once you catch 2 or 3 fish from a spot, the rest will tend to get put down. If that happens, don’t worry; come back to it an hour or so later and they’ll be right back in there again.”

Martin also suggests that changing floater colors, or adding a bead to a single-hook rig, often helps trigger strikes from nervous fish. “And while minnows work well for early-season walleyes,” he says, “I like to switch to live leeches as soon as they become available in the bait shops, or thread an Impulse® Rig’n Leech on the hook. It really helps cut down on the number of non-target species you catch.”

Walleyes may be stationed in the weeds anywhere around the lake this time of year, but Martin suggests starting out fishing North Bay above Houghton Point and along the western shoreline down to and including the massive submerged point to the south. “Also try going into Backus Creek on the east side of the lake, and the channel just south of the creek mouth,” he adds. “Both are fairly deep and will hold walleyes now. Rig a live or artificial leech on a Fire-Ball® or RZ jig and probe the edges.” 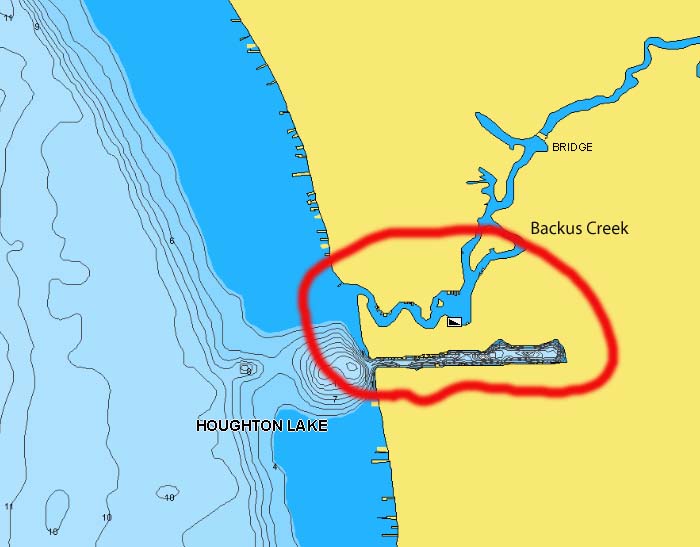 Bass anglers, too, should head to North Bay this time of year, according to the angler. “The water’s usually warmer in there,” he says. “Plus, later in the season, it gets very weedy and really tough to fish.” He recommends casting and drag/hopping a soft plastic tube bait, or a ¼- to 3/8-ounce Jungle Jig® with a soft plastic crawdad trailer. Houghton is known to produce master angler-worthy bluegills, too, and when water temps approach the 65-degree mark, the north shoreline east of Houghton Point is the place to look for them. “This is the time when you can find better-than-average gills most consistently,” he says. “Move along the shore and focus on the sand-bottom openings in the weeds. Try fishing a Bling Jig or Gill-Getter tipped with a waxworm or small leech, or even an Impulse® Rigged Bloodworm or Mayfly, under a slip float.”

2. Shoreline vegetation gets taller and thicker, and the edge grows farther from the shore with each week that passes. By about the second week in June—sometimes earlier; sometimes later—dragging a rig through the weeds is no longer an option. Then, Martin recommends trolling a floater rig, or a smaller spinner rig, through the tops of the plants, focusing on the zone just inside the outer weed edge.

“Use a ¼-ounce Rock-Runner® Slip Bouncer, or even a bullet weight or split shot, ahead of the rig, “ he explains, “whatever weight you need to run the bait through the tops of the weeds without going too deep. The plants are thicker and tougher now, so be sure to use a braided line that will see through them if necessary. In fact, I use braid all year long on this lake.”

Bass anglers, too, focus on weed edges now, but the savvy ones jump to the other side, says Martin. “Position the boat as close as possible to the shoreline and cast to the inside weedline,” he notes. “Tubes and jigs work, but also try spinnerbaits, topwaters, and a variety of soft plastics.”

When the vegetation grows even denser, Martin recommends switching up the approach. “A lot of anglers continue to work the edges because they don’t want to deal with the weeds,” he explains, “but now’s the time to head right back into them with a jig. Rig an Jig’n Leech, or Swim’n Grub on a lead head and move the boat slowly through the weeds, dropping the bait into any opening within reach. No question, it’s a lot more work, but you catch a lot more fish, too.” Eventually, the shoreline vegetation grows so thick, even the holes close up, and that’s when it’s time to move offshore, according to Martin. “Houghton Lake has many offshore flats that, while still shallow, they’re deeper than a lot of what you find along the shore,” he says, “which means the weeds there start growing later, moving the whole progression back. You simply start over again with your techniques and work through them as you did earlier, close to shore.”

The lake is littered with such spots, many of which don’t show up on most lake maps, he says. It pays to poke around looking for uncharted areas, but to start off, spend some time on the flats on the eastern side of the main basin.

3. Anglers continue to probe the weeds through fall, and things don’t change much once winter arrives. “Most fishermen set up along the weedlines,” says Martin, “but in my opinion walleyes are a lot like whitetail deer; they hang out along the edges and don’t come out into the open until the conditions are just right.

“Again, it’s a lot heavier work, but you’ll catch much more fish if you go into the vegetation. Yes, you’ll get snagged, and you’ll have to pull a few weeds out with the lure until you make an opening big enough to fish. The water gets murky and muddy, but they’ll stream in there ready to eat. I’ve seen it happen on my underwater camera.”

Standard winter fare—a Buck-Shot® Rattle Spoon or Buck-Shot® Flutter Spoon tipped with a minnow head, or a Puppet Minnow will do the trick most days but don’t hesitate to tie on a Rippin’ Shad or something else if you need to turn the tide.

“You can just about throw a dart and hit a productive weedline,” says Martin, “but a solid option is to visit with the folks at Lyman’s on the Lake when you pick up the bait. They always have a good handle on what’s happening on Houghton Lake and are more than willing to share information with customers. What’s more, they’re well stocked with Northland tackle.”