It’s been a few years, but I’ve always been a big fan of full-moon fall trolling on the big lakes. What thermocline may have kept bait and ‘eyes out deeper all summer, gave way to incredible shallow water fishing come late October and November. What surprised me however, was just how many anglers had that full-moon fever bite going, and never re-connected with it come first ice. Those same fish didn’t make vast moves or change their feeding patterns too much. They were just under a few inches of ice now.

It’s that same mentality you need to take with you to the lake come first ice walleyes, especially from a location perspective. You’ll have plenty of time to pound off-shore reefs, deep mud, gravel bars, and rock piles. Early ice is the time for fishing right off of shore, just below or on the “first break.” By that, I mean simply that you should look for the first appreciable steep drop from shore, which could bottom out anywhere from 5 to 15 FOW. First ice walleyes love to cruise the bottom of these edges in search of food, and when you’ve got some weed cover, substrate change, or other features to target, the spot is all that much better.

Large, main-lake points are favorites no matter where you go, to focus feeding attention of hungry ‘eyes. They’re also angler magnets, so if you’re fishing pressured bodies of water, understand that you don’t always need to be on a prominent piece of structure to get it done. More and more, I’m looking for small areas of interest. A living-room sized patch of rock that doesn’t show up on the contour map, a quality weed-bed that’s more dense than the surrounding area, or even some hard-pan sand vs. nearby mud or muck. Often, that’s all it takes to gather some near-shore walleyes once the lakes freeze over.

Where most anglers miss out on the shallow water walleye bite, is that they fish it the way they would mid-winter walleyes in deeper parts of the lake. They ice troll across the shallow flats, scaring the very fish they seek. With fall trolling, we learned that there were nights where hundreds of feet of line behind the boat was what it took to get bit. The same walleyes that don’t love hanging tight in your main-motor wash, don’t appreciate lots of hole drilling and overhead traffic. 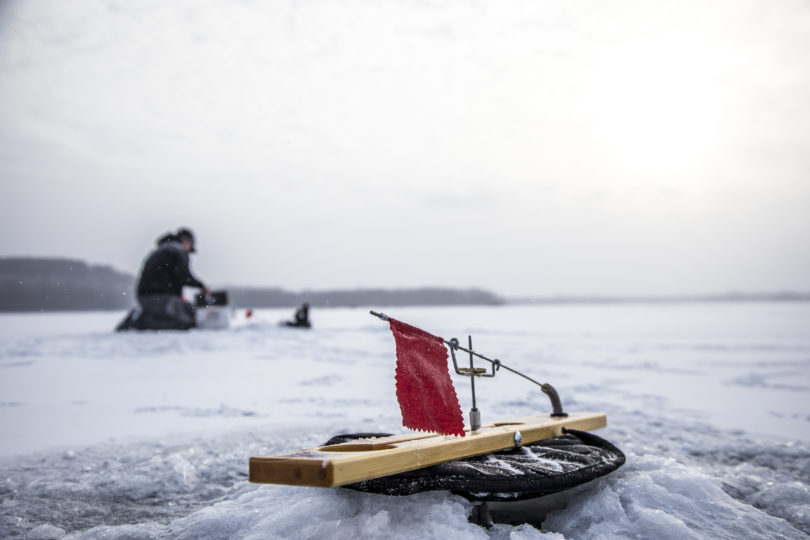 For that reason, it’s best to have a few dead-set approaches. While there are a few ways to skin that walleye, the two I employ are tip-ups and deadstick rods. Tip-ups for early ice eyes are a mainstay and have been around for forever, so there’s not much new under the sun here. Select some quality fluorocarbon line in or around 10lb test, select a good light wire live-bait hook, and rig up a small sucker or preferably shiner pegged with a sinker above the hook a few inches. Put that sinker closer to the bait if a lively sucker, or further for less lively minnow species. Set your tip-up on a very “light-trip” setting, preferably not under the notch unless needed for wind’s-sake. Then you wait.

Tip-ups are great, but do have their problems. Namely, fighting a fish hand-over-hand, especially if it’s a trophy. Dead-stick rods on simple rod-holders have been a great solution to that problem and more, while offering several advantages over the standard tip-up scenario. Why a specialized rod for this type of fishing? Mostly because a dead-stick is unlike any other ice rod. The action is extremely slow for half or better of the length of the rod, offering bite-detection and minnow-monitoring convenience. Then, a hard-wall on the blank that goes straight to very stiff backbone – perfect for setting the hook.

While dead-stick rods may tangle, any issues are usually seen quickly and above ice, rather than the below-water snarls that can happen on a tip-up without you knowing about it. More importantly, a quality dead-stick will telegraph every movement of the minnow, all while offering you immediate clues both during and after the bite. Set the rod in the holder, and watch your bait or several baits go to work.

Sometimes the fish will grab the bait and sit right below the hole, which is easily seen on a deadstick as it very slowly loads. That’s far less visible and harder to manage a hookset when that happens on a tip-up. I highly recommend bait-feeder reel designs for these rods, as with the flip of a switch, free-spool is offered to running walleyes. These quick runs are easy to detect for either tip-ups or dead-sticks, but the hookset and fight are usually superior on a dead-stick-setup. 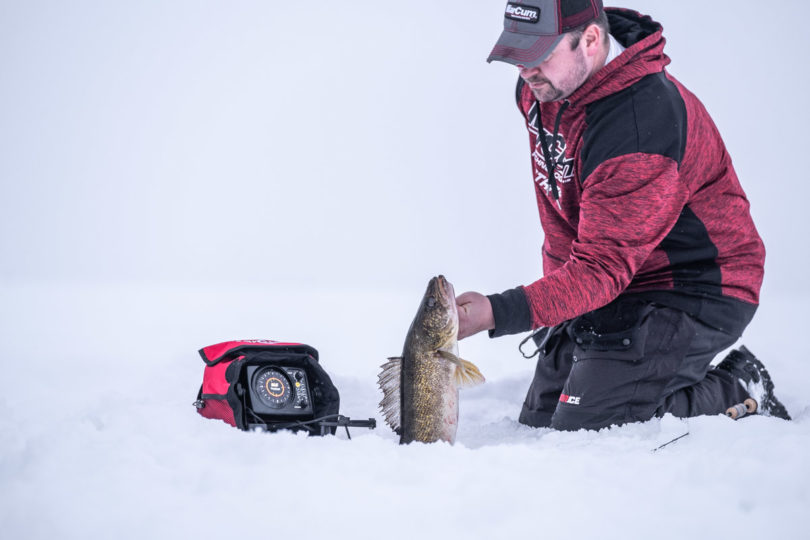 Usually, I’ll either jig on the deeper side of the break and watch a deadstick rod right on it, or many times, simply put out the max number of lines I’m allowed in dead-sticks and wait. As with most things walleye, the bite is best early and late, but cloudy days can make for spurts of great fishing throughout. It’s a really fun way to fish if you’ve got a group of friends, as you can cover a long section of break, all while enjoying each other’s company until a rod goes off.

Just make sure to tend the set, just as you would a tip-up. Extreme cold weather doesn’t bode well for this type of fishing, but the good news is that first ice is typically pretty mild after that first blast of cold that locks everything up. Check your baits, make sure the hole isn’t icing up too badly, and more than anything, resist the urge to drill too many holes and stomp around throughout the day. These fish are sensitive to noise, as you may only be targeting them in 5-8FOW.

Especially when your panfish lakes aren’t locked up well, or you’ve got good walkable ice near-shore but not the whole way out, this is the way to go. Setup a few hours before dark, stake out your spot, and wait until some rods start bending or flags start flying.