Dakota Tips to Make it Worth the Trip – North Dakota-based Northland Fishing Tackle pro staffer Chad Malloy is a big fan of numerous lakes in North Dakota, Jamestown Reservoir being one of his favorites, especially during early- to mid-ice. “They have excellent crappies, big perch, and lots of walleyes. It’s a reservoir system and there’s current that runs down the middle, so we’re careful when we go, always checking ice conditions. We also use GPS mapping on our phones and Humminbird units to make sure we’re off the main channel,” notes Malloy.

“We have one spot close to the access that we can walk to and it’s basically a point that comes out with a back eddy and a hole. The fish gather up there; I’m assuming the bait washes up. Last season we got there and tied on Bro Bug Spoons and it was lights out. My buddy Dave has the new Mega Live from Humminbird, which is unreal for watching the pods of fish come in. We used 1/16- and 1/8-ounce Bro Bug Spoons on a light panfish rod with a fluorocarbon leader,” remarks Malloy. Malloy continues: “I’m a big proponent of the Bro Bug Spoon—it’s tapered and has bulging insect eyes as well as a split-ring that attaches a wide-gap treble hook that dangles the bait and promotes solid hookups. I fished the Sneeze color, which is mostly chartreuse with a little bit of orange on one side and green dot with black in the center. It looks like an insect that fish are feeding on, and resembles a small minnow, too.”

“The fish were skittish because of the thin ice. With Mega Live you can see fish move off when someone is walking around. We would then hunker down and the fish would come back. So, with early ice it’s important to be quiet and not move around a lot. And I think that having a lure that’s quiet is sometimes better—and sometimes the opposite is true—but on this day, we whacked them on the Bro Bug Spoon. All we needed was a fathead minnow head on the bait and would tease them up a little bit from the bottom and they’d just rip it. We caught a healthy mixture of walleyes and jumbo perch this way,” adds Malloy.

Later in the day the fish got more aggressive, so Malloy and partner Dave tied on the smallest size Northland Rippin’ Shad. A solid presentation was ripping the bait two or three times to get the rattle engaged, followed by lifting the bait above the fish. When that bite quit, the duo downsized to the smallest Bro Bug Spoon, added a few maggots, and were able to catch more perch. Malloy also fishes Devils Lake every chance he gets. “On Devils the rattle spoons really shine. The Buck-Shot Rattle Spoon is by far the number one bait in the area. Tip it with a minnow head when you’re searching for walleyes and use the larger ones—at least a ¼-ounce. Perch will eat them, too. Another one of my favorite lures is the Buck-Shot Coffin Spoon. It marries the Buck-Shot Rattle Spoon with the Macho Minnow Spoon by having a brass rattle on a coffin-shaped body, so you have the rattle and the kicker tailfin. You’ve got a flipping and flashing action, the rattle, and the cut and taper of the spoon makes it dart to the side on the drop. To me, it’s the trifecta of actions in one spoon. It’s worked very, very well and I can see it becoming a top producer for walleyes and perch on Devils Lake—and just about any other body of water.”

On Devils Lake, sometimes the walleyes are aggressive, sometimes less aggressive, but for the most part, it’s an active bite. When they’re active, Malloy recommends Rippin' Shad in all three sizes depending on the size of the fish that have come in. 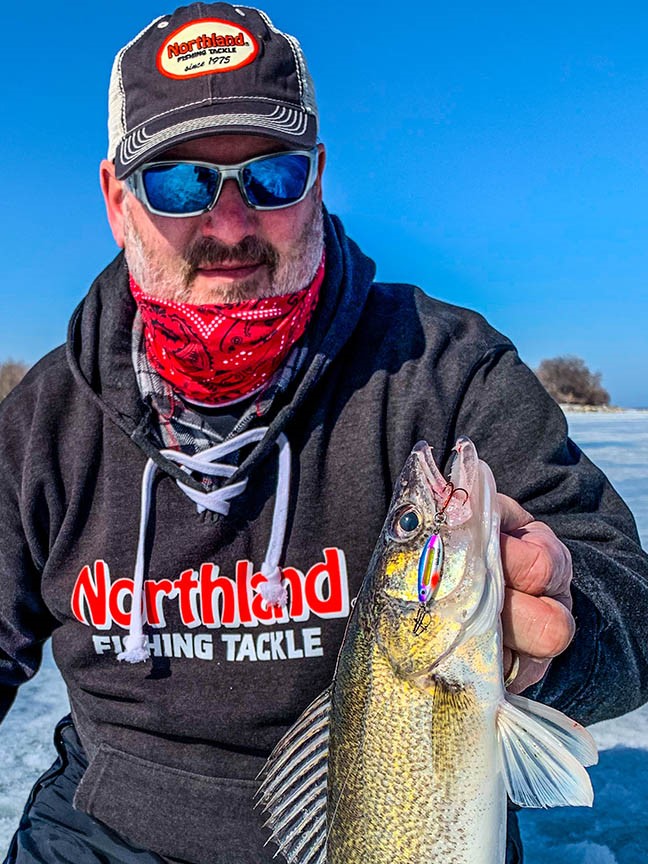 “I’ve been using lipless crankbaits for walleyes for the past ten years or so. It all started on a trip to Lake Winnipeg. The technique, which was pretty much pioneered on Lake Winnipeg, has carried all over the country, too. Depending on how excited and aggressive the fish are helps you decide what size bait to use. You can catch a trophy-sized walleye on the smallest Rippin’ Shad as well as small ones on the big sizes. Fish are eating various bait and the size of the bait is bigger than you might imagine. I don’t think you can use too big of the lure when the walleyes are aggressive. But fishing a smaller size when they’re neutral will elicit more bites. There are times when smaller lures do produce more fish. It’s all trying to feel what the attitude of the walleyes are,” notes Malloy.

He continues: “Same thing for perch. On an outing to Devils Lake last winter, I was fishing a larger spoon. I could get them to chase it off the bottom, but I couldn’t get them to swallow it. So, I switched things up to a small Tungsten Mud Bug. They are perfect for loading with waxies or maggots. The Mud Bug is a smaller, more dense target and those perch are able to suck in the bait easier. When they’re a bit more neutral, it’s easier to get them to hit a tungsten jig than a spoon.”

A tip Malloy is happy to share involves matching-the-hatch. “Our best catches come when we can find a small piece of structure by itself. We have one area where there is a sunken road and a culvert surrounded by old brush. Those brushy trees hold the freshwater shrimp (scuds), a main food source in the lake. Last year we had some excellent luck using the Northland Glo-Shot Fire Belly Spoons. The spoons have a hollow center that you can place a mini glow stick into, and one of my favorite colors for any Dakota lake is UV Pink Tiger. My theory is that pink color gives the illusion of the shrimp.”