The town of Clear Lake, Iowa, is, of course, remembered by many as the site of the last concert performed by Fifties rocker Buddy Holly. The show concluded shortly before his departing airplane flight ended in a tragic weather-related crash.

The lake for which the town is named isn’t so well-known, however, especially among sport fishermen. There was a time, in fact, when it was only on the radar of anglers who pursued bullheads. Today, things are much different. A massive lake renovation project that began in 2008 has vastly improved water quality, and these days Clear Lake is a prime destination for walleye, muskie, and crappie fishermen. Many anglers also pursue yellow bass, which is now the primary forage species for predator fish.

Bob Jensen, Team Northland member and a driving force behind the “Fishing the Midwest” franchise, resides near Clear Lake and has witnessed its transformation from a “bullhead capital” to an angler’s delight.

He says the lake has a good population of walleyes from 17 to 24 inches, and that it’s not uncommon to catch a larger fish on any given trip. Muskies, too, are plentiful, especially fish in the 40- to 42-inch range. Crappies are on the upswing in Clear Lake, he adds, and anglers who know where and when to target them can catch fish in double-digit lengths.

If Clear Lake isn’t on your fishing radar now, it should be. Here are a few of Jensen’s multi-species tips that will help you get started. 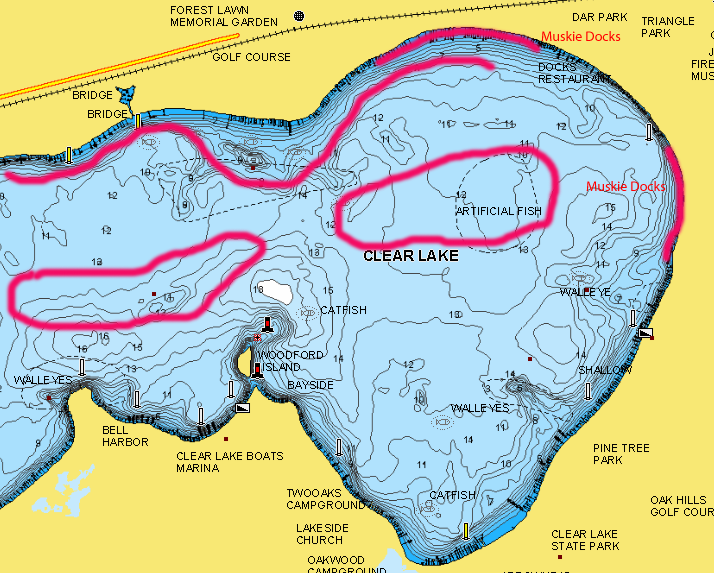 1. From summer through October, walleyes in Clear Lake remain spread throughout the water body, and anglers who make a point of covering a lot of acreage are more likely to catch numbers of fish. Jensen recommends trolling the north shoreline with Mr. Walleye® Crawler Haulers behind a ¾- to 1-ounce Rock-Runner® Slip Bouncers. “The whole north shore is good,” he says. “Just make S-turns at about 0.9 mph in about 7 to 12 feet of water.”

The angler prefers slip bouncers because they allow him to quickly adjust the trolling weight when used with a Quick-Change Weight Clevis. “The ability to fine-tune the weighting system can mean a big difference in your catch rate,” he says, “and rigging the harness with an Impulse® Nightcrawler will also keep yellow bass from stealing your bait.”

Trolling the lake’s main basin with shad-body crankbaits is another option, according to the angler. Walleyes key on the bottom-hugging yellow bass, so cranks must dive fairly deep. Let the lures back as much as it takes to keep them running a foot or two above the bottom, and use planer boards to get them away from the boat’s trolling path.

Muskie anglers should focus on the numerous docks along the shoreline this time of year. Cast a Bird-Shot Bucktail or Bionic Bucktail® Spinnerbait along the sides and ends for predators waiting in ambush. T-shaped docks usually produce better than straight docks, says Jensen. 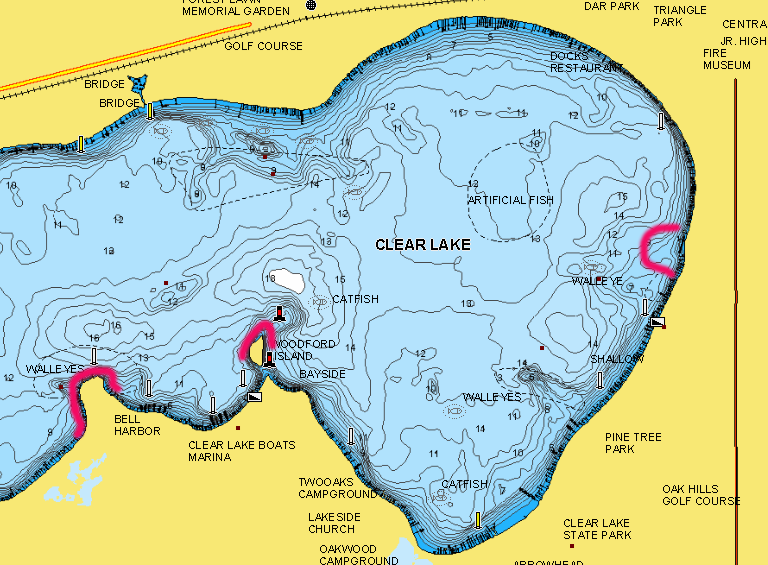 2. Fall is prime time for shore- and wade anglers, especially during the full-moon period in October. Jensen suggests casting minnow baits near the outlet on the lake’s east end, near Woodford Island, and along Dodge’s Point on the southern shoreline. 3. Jigs rule the early season on Clear Lake, and Jensen recommends casting a 1/16-ounce Fire-Ball tipped with a live minnow or an RZ Jig with a 3-inch Impulse® Swim’n Grub. Start with white or chartreuse, then move on to other shades if walleyes don’t respond, he says. Fishing a slip float rig is another option this time of year. Jensen likes to offer a bit of color, so he uses a minnow-baited Hook under a Lite-Bite Slip Bobber. “Again, white or chartreuse is a good place to start, and that touch of color makes the whole presentation more attractive to walleyes.”

In the spring Jensen fishes the same areas of the main-lake shorelines he did in the fall but also recommends the small section of the lake at the far west end. The man-made earthen pier located on the western causeway is a very popular, but highly productive, spot for anglers fishing afoot.

The western section is also a hot spot for early-season crappies. Jensen suggests starting out in the reed bed on the eastern side, just off Macintosh Wood State Park. “Use a long, telescopic pole with two feet of mono tied to a 1/16-ounce Fire-Fly Jig,” he says. “There’s no science to this; just dip the jig into open pockets in the reeds. If you don’t get a bite in 5 seconds or so, move to the next pocket.”