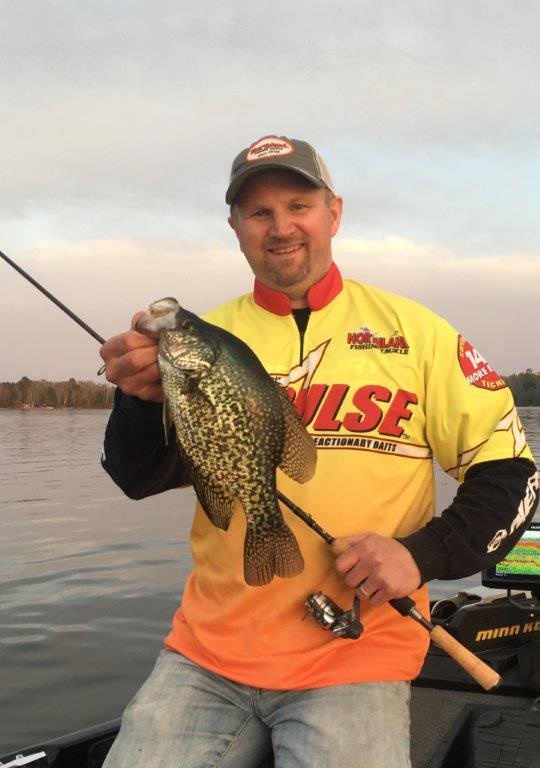 Across Canada and the northern United States, “ice-out” is like a long awaited holiday. Each spring, the first anglers to float the boat are often in search of crappies. Initially, an ice-free lake will have fairly consistent temperatures throughout. Within a week of ice-out however, “warm-spots” will develop. This translates to “hot-spots” for the anxious slab chaser, as water temperature is the key to locating early spring crappies.

After a long lazy winter, crappies move shallow. Not to spawn, rather, they are drawn to the shallows in search of basic comforts; warm water and food. It’s here that a flurry of life in the form of insect larvae, zooplankton, and other bottom critters occurs. Minnows move in to feast on the buffet of micro-organisms. Crappies soon follow and feast on all of the above. During this time period, crappie location is as predictable as it will be all season.

Scoutin’ Slabs
No need to rise early for spring crappies. The afternoon hours are generally more productive as the water in a given area will often heat up a few additional degrees. Afternoon air temps are typically more appealing to the spring angler as well.

It helps to do a little scouting before even wetting a line. A temperature gauge is a valuable tool for finding many gamefish in the early season. By cruising to different areas of the lake and comparing temperature readings, the investigative angler can find some likely starting points. It’s important to get up into the “crooks and crannies” where water is least likely to mix with the main body of water. A couple of degrees difference is often all it takes. Obvious areas to search for warmer water include shallow bays. Check those in the northwest corner of a particular body of water first, as they will get the most sun and thus warm faster. These bays are also protected from the cool and prevalent north and west winds. Also, bays with dark bottom content will absorb sunlight and warm sooner than sugar sand bottom. Some of the very best spring crappie locations are man-made canals and boat harbors. Tributaries such as rivers and small creeks have drawing power as well.

Crappie Cover
Within these warm water haunts, crappies are attracted to available ambush cover. Vegetation, dead or alive, absorbs heat from the sun, further warming the adjacent water. Key targets include brush and dead bulrushes, reeds, and cattails. The same fallen logs, beaver huts, and reed banks will hold crappies each spring. Bank anglers can often sneak right up on these crappie magnets. Boaters should shut down the big engine at a distance and use a trolling motor or paddle for the final approach. Polarized sunglasses are helpful in spotting fish as well as submerged timber and vegetation.

An alternative approach to the sneak attack involves “delayed sight-fishing”. This requires relatively clear water and works best with a two-angler team. One angler steers the boat along the shoreline using the big engine. His partner, positioned at the bow of the boat, attempts to spot crappies holding in and around cover. Some fish will spook while others will pull deeper into the cover. Within a short time however, most fish will return to a relaxed state. By taking note of the best concentrations of fish, the anglers can return a half hour later with a more stealthy approach.

Vertical Presentations
For shallow crappies holding tight to cover, it’s hard to out-produce a slip-bobber rig. My favorite crappie jigs to suspend below a bobber are Fire-Fly Jigs and Gypsi® Jigs, produced by Northland Fishing Tackle®. I’ll add a small minnow or a Buggy Tail.

Once within casting distance of likely cover, many crappie anglers like to anchor in place. By adjusting the bobber-stop, the jig can be suspended next to or above the intended target. Caution should be taken not to spook fish with the splash of the bobber. An obvious option is to down-size to the smallest bobber that will support the bait. Another effective technique, implementing a heavier float, is to cast past the target and slowly retrieve it back to the target area. When fishing a fallen tree or beaver hut, a logical approach is to work the fringes first. Once hooked, fish are pulled away from the cover rather than through it. This increases the odds of landing the fish without getting hung up and is reduces the chance of spooking additional fish. Long bream poles, employed by some panfish gurus, allow them to make precision presentations and lift fish up and out of the cover. Often, several crappies can be extracted from a single piece of brush.

When targeting a stand of dead bulrushes or other vegetation, cast-length is dictated by the density of the cover. A long cast into dense vegetation is obviously not advised. Sparse patches of cover however, are tailor-made for a long cast followed by a stop-and-go retrieve. Once paused, most often crappies will take the presentation within thirty seconds. If nothing happens, it’s time to move. By slowly retrieving the presentation a few feet before pausing again, an angler can cover more water with each cast.

Invariably, some snags will occur when bobber fishing around cover. It’s part of the game. When fishing a slip-bobber rig, there’s nothing more frustrating than breaking off on a fallen tree and watching the bobber float away. To avoid this, place an additional bobber-stop six inches above the jig. The line will generally break at the knot. The bobber-stop below the float will prevent the line from slipping through it. Reel in, tie on another jig, and get back to fishing

Horizontal Presentations
While bobber rigs are great for fishing tight to cover, casting small jigs will load the boat under the right conditions. On my first crappie trip last spring, I recall locating a large concentration of crappies in a small bay. Some were tight to the bank and positioned next to and below logs and brush. I learned that the fish were active and very willing to chase down a lure. I flipped a 1/16 oz Northland Mimic Minnow® Spin against the bank and had a blast. This lure is a miniature spinnerbait with plastic shad tail. Like the name implies, it really emulates a minnow. Other favorite jigs for casting to crappies is a Thumper® Jig or the new Mimic Minnow® Fry. A feature consistent among all of these lures is flash. When crappies are active like this, a horizontal presentation is the way to go.

For spring slabs, scout out the shallow “crooks and crannies” for water that is warm, relative to the main body of water. Target available cover. Mix some horizontal and vertical presentations. Most importantly though, enjoy the return of the ripple on the water.