BEMIDJI, Minn. (January 27, 2021) – Lake Superior’s acres are tabulated in millions, 20.288, in fact. Of those, however, only a fraction is considered ice fishing territory. But in aggregate, when you compile Canada’s portion with shoreline zones in Minnesota, Wisconsin and Michigan, we’re still talking hundreds of thousands of hardwater acres.

One of the most hallowed winter fisheries is Wisconsin’s Chequamegon Bay. Trenched between the cities of Ashland and Washburn, Chequamegon Bay opens into the iconic Madeline Island and Apostle Islands – revered tourist destinations. But in the dead of winter, ice fishing pumps the blood flow.

Recently, Northland Fishing Tackle’s Nick Lindner took the offer from pro staffer Jarrid Houston to drop lines in the bay. Together, along with local ice ace Eric “Sherpa” Holl, the trifecta tripled down on an array of species, including splake, brown trout, herring, whitefish and even schoolie Coho salmon. 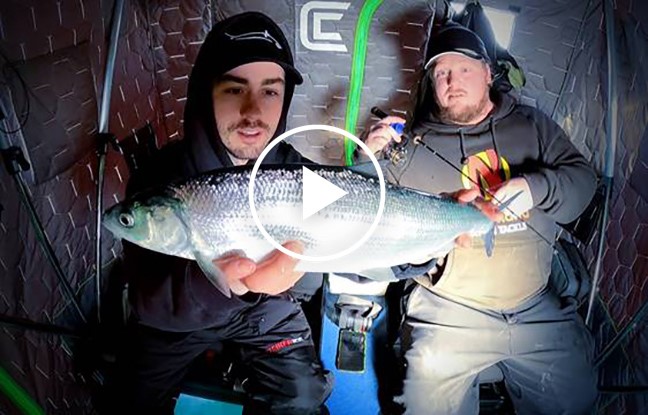 The day’s play was operating in hydrogen clear waters around the 50-foot mark. And unlike your average walleye or panfish excursion, Lake Superior’s pelagic species don’t hunker down in a zone. In this instance, “pelagic” meaning fish that aren’t bashful about utilizing the entire water column.

In this video, the team plays cat-and-mouse, literally teasing fish from the bottom to just beneath their boots, turning what was a red mark on the flasher into a dramatic sight-fishing finish.

Great Lakes ice fishing is novel and foreign to many out there, so this video is for you…