Letting Your Hair Down for Walleye Fishing

The hair transplant was a success: Bucktail Jigs make a big comeback with the walleye bigwigs 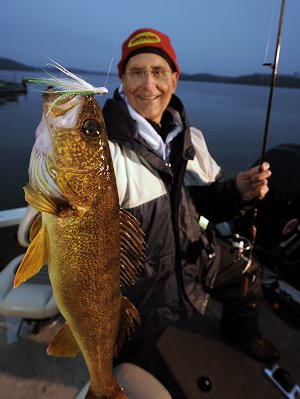 I was a twelve-year-old dock boy living the dream at a resort in Northern Wisconsin. By day, I’d hang out with minnows and men who tell fish stories, while earning a little walking around money for my efforts. It was there one summer that I met Hans, an unassuming Swede and regular at the resort.

Without fail, he’d motor back to the dock after sunset with walleyes to show. Oftentimes, he was one of several successful anglers returning to camp. But there were plenty of other times when Hans was the only one who walked the hallowed path to the fish cleaning house. The “skunked” guys claimed that the fish simply weren’t biting.

Well, I was biting. Hans knew something they didn’t. Whether it was a sixth sense always knowing where the active walleyes schooled, or a secret lure, I needed to find out. Luckily, the journeyman angler appreciated my inquisitiveness. Without making me beg, he produced the magical morsel – a yellow-haired jig.

He called it “bear-hair”. Looked like deer hair to me, but who was I to question the man who just turned over the Colonel’s secret recipe. Hans said the secret behind the secret was how it moved in the water. It pulsated, breathed, didn’t just bounce around like a piece of metal. And the proof was in the pudding, or more precisely, the consistency of his catches.

Thinking back, my guess is that the sagely Swede hand-tied those jigs. But not long after, a handful of similar patterns popped up on bait shop walls. There was the “Jack Crawford Jig” and the original Pinkie Jig out of the Chicago area, as well as a few other garage-job versions. Hair became pretty popular in the ’60s and ’70s, but ultimately lost the limelight to soft plastics – so-called more “technological” and “advanced” replications. (I’ll save discussions about that myth for another time…)

In my opinion, natural fibers simply move more fluidly in water than plastics. Don’t get me wrong, I fish plenty of plastics – especially for bass and panfish – but when spring walleyes are the main course, I’m going with either a hair-jig or some type of meat, like a minnow on a live bait rig, or maybe even a combination of hair and meat.

(Something I forgot to mention about Swede’s undefeatable hair jig was that it didn’t always act alone. Often, he’d thread half a crawler up the hook shank. He said the natural scent made the difference when fish were finicky. I have a hunch the walleyes liked the taste and squishy feel as well.)

Fast forward to 2010… There’s a retro movement afoot. Hair jigs are reappearing. And this time, technology is actually improving the classic lure. For instance, what was once crude-shaped lead heads are now artfully sculpted to resemble actual baitfish. The head of the new Northland Buck-A-Roo Jig, for example, features realistic eyeballs, mouthparts, gills, and even fish scales.

Now throw in some color. Not just one or two shades, either, but a realistic multi-tone treatment with distinct contrasts, just like an actual baitfish. Study the head of a live minnow. You’ll never see a solo brush stroke. Even if the head is essentially one color, there’ll be shades, and definitely light to dark contrasts.

Looking past the sculpted head, these contemporary jigs also feature hair colors and combinations of colors that are not only remarkably ornate but also mimic the hues of native baitfish. Consider the Silver Shiner pattern in Northland’s Buck-A-Roo lineup. The authentically patterned head blends into a body of color-coordinated fibers. The jig’s tail is a complex mixture of white, grey, black, and silver fibers. Hold the jig at an arm’s length and the unique fibers bond into the perfect composite of a shiner minnow. Move it around in the water and it’s as if you’ve created life. I’m not joking.

There is something else I need to mention that’s specific to the Buck-A-Roo series. Each of the eight unique patterns is darker on top than the bottom. Grab that live minnow again. The belly is lighter than the back, right? The same is true of everything from shiners to suckers and chubs to crappie minnows. It’s a thing of nature.

Having such natural looks and action make hair jigs amazingly versatile, too. They’ll catch fish in 5 to 50 feet of water and are great for connecting with suspended fish, too. I’ve trolled and drifted them with success – even dangled one under a cork with a live leech and caught fish.

When push comes to shove, though, the prime periods for throwing hair jigs are spring and early summer when walleyes feed-in 15-feet of water and less. True, that’s a big window of time. But the bushy jigs are simply that adaptable. Hair jigs effectively slither through emerging weeds – a favorite feeding ground for early season walleyes – as well as along established weedlines. Hair jigs, especially crawfish patterns, are nasty on walleyes and smallmouth bass over rocks. And for casting current, there’s no better presentation for capturing the water’s natural motion and converting it into true-to-life baitfish action.

That flowing baitfish action is easily mimicked in a lake, too. In fact, that pulsing, almost innocent action is at the crux of the retrieve. Rip out the page on traditional jigging from your fishing playbook. There’ll be no “jigging” here. Rather, the retrieval motion is a soft lift and drop, lift and drop, lift and drop. Snaps and spastic twitches don’t do the jig justice. That just creates a stiff and unnatural look. It’s the slow rising and falling that lets the jig pulse. Imagine a jellyfish propelling itself through saltwater or the fluid tentacles of a squid. That’s the look.

Depending on the depth, and overall fish aggressiveness, go ahead and experiment with the height of each lift. Try a foot, and then two. Sometimes, a walleye responds best to a hair jig that’s delicately dragged and occasionally paused inches above the bottom. It won’t take long to figure it out. The fish will send you a signal. Although plastics are off the table as an additive, meat has meaning. No matter how fantastically accurate its profile, color, and motion, a live minnow can be a tremendous closing tool. To that point, if you’re uncomfortable fishing a naked jig, stick a minnow on that hook. Be selective, though, because the benefits of adding scent and taste can be nullified if you screw up the action by using too large a minnow.

I like a smaller inch and a half to two-inch minnows, shiners if available. Nose hooked, they’ll nestle in the center of the plume, the minnow’s tail poking out just a hint, adding even more realism. I’ve been known to trim the hair, too, shortening the overall length to make sure the minnow’s tail is fully visible. If you do decide to shorten the jig, cut the hairs at an angle. A blunt cut actually diminishes the desired pulsing action.

Despite the jig’s peaceful action, strikes are often brutal. A hair jig can bring out the worst in a walleye. With that in mind, I fish relatively heavy 8 or 10-pound test mono, Suffix Siege to be exact. There’s no waiting period on the hookset, either. Often, the hair jig is pretty much buried on the initial strike after a quick zing of the rod tip. Take that, Mr. Walleye.