Lake Pepin on the Mississippi River, though bounded by dams at Hager City and Alma, WI, is actually a naturally occurring lake that was formed over time by sediment deposits that created a barrier, constricting the Mississippi’s flow at the mouth of the Chippewa River tributary.

At 21 miles long and roughly 25.000 acres in size, Lake Pepin has 100-plus miles of shoreline punctuated by fish-holding points, rip-rap, and steep breaklines. Moreover, the lake’s diverse and abundant forage base, consisting of various minnows, shiners, chubs, shad, crustaceans, and insects, supports a variety of panfish, predators, and bottom-dwellers.

As a border water between Minnesota and Wisconsin, it’s open to fishing year-round, making it especially popular in early spring when inland waters are closed to sportfishing. The early season is also prime fishing time on Pepin, according to Team Northland member and tournament angler Chad Maloy.

“Some years you can get a boat on the water in February,” says the angler, who was raised in Lake City, MN, and grew up fishing Lake Pepin with his dad and grandfather. “Typically, though, things start rolling in March and April.”

Since many walleyes are moving out of the river and tributaries at that time, the first fishing action of the year centers on the channels at the upper end of the lake, he says. Anglers fishing a minnow, chub, or willow cat on a jig or 3-way rig typically troll, drift, or cast the upper channels.

Katrina’s Cut is a particular spot Maloy suggests anglers check out. “Try anchoring the boat, pitching a 3-way rig with a chub or willow cat and working it slowly back,” he says, “or pull a rig with a Gum-Drop Floater and small leech from north to the south against the current. When using live bait here, shorter is often better. A walleye is more likely to take the hook instead of just the bait.” Further downstream, Presbyterian, Friedrich, and Green points—just below Wacouta Bay—can hold fish throughout the summer, but are early-season hotspots as well, he says. “All of them extend out close to the channel, but Presbyterian and Friedrich are the better of the three because they’re more exposed to the current,” he says. “Don’t ignore Green Point, though; it’s always worth checking.”

Border-water regulations allow an angler to fish two lines, so Maloy often fishes a 3-way rig and chub from a rod holder while pitching a jig on a second line into the rip-rap. “Tie on something like a Current Cutter or Rock-It Jig with a soft plastic ringworm or Core Swimbait; toss it into the rip-rap and work it back slowly. You want it to tumble a bit in the cover because the fish will be in there looking for something to eat. Pop or twitch the jig just enough to keep it moving in the rocks.”

And be prepared to lose a few jigs, he adds. Rip-rap may not be forgiving, but it produces fish.

“At times you can pull up to a point and catch three good fish on three casts,” he says. “Other times it’ll be here-and-there, and sometime you won’t catch a thing. Just remember that the walleyes are always moving—like wolf packs; a school could pour in at any time, so it’s worth it to go back multiple times if you don’t hit them right away.”

Optimal jig weight and lure color will vary with current strength and watercolor, he explains. “A 3/8-ounce head is a good place to start,” he says, “then go lighter or heavier as the current dictates. And if the water is running on the clear side, go with a lighter, more natural, color with the soft plastic; darker in murky water. When the water is dirty, black seems to work best.”

Another option here, he adds, is to troll the channel edges with a shad-body crankbait on the lead-core line. Conventional tactics call for trolling up current, but Maloy suggests moving outside the box and pulling downstream if the first tactic fails. “The fish face upstream and sometimes a fast-moving lure zipping past a walleye’s nose triggers a reaction strike.”

On the Wisconsin side, the angler suggests fishing creek mouths or trolling the flats. “Anywhere you see a small point on the Wisconsin side of the map probably indicates the mouth of a creek. Try dragging a Roach Rig with a chub on a fish hook around the mouths, especially those that have a noticeable depth change.

“Walleye might also be scattered along the flats from the creeks down to Warrentown,” he adds. “Cover water by trolling a Butterfly Blade Rig with a chub or leech behind a bottom-bouncer.”

From spring into summer, Point No Point, along with Long, Central, and City points, on the Minnesota side of the lake are solid spots for walleyes, according to the angler. “You can do a lot of different things here,” says Maloy. “Point No Point is mostly rocks and gravel, and the current isn’t as strong. Fishing jigs, cranks, or bottom bouncers here are typically very productive through early to mid-June.

“Early on rigging a chub or willow cat around Long Point is very effective as well,” he continues, “but dragging a crank on lead-core along the breakline can be equally, or more, productive.”

Fishing can suffer during the heat of the summer on Lake Pepin as algae blooms and overall weather conditions tend to slow things down. Fish can be caught, however, in many of the areas already mentioned, Maloy says, but add Central and City points to the list as well.

“Try pulling a nightcrawler on a Butterfly Blade Harness behind a bottom-bouncer, or a crankbait/lead-core combo, using an inline planer board to put space between the bait and the boat. Troll around both of the points, as well as the bay between them, moving from deep to shallow to deep until you connect with fish. Everything is about finding the right breakline now.”

On the Wisconsin side, use the same tactics from the Deer Island area down to the Pepin Marina, he adds. 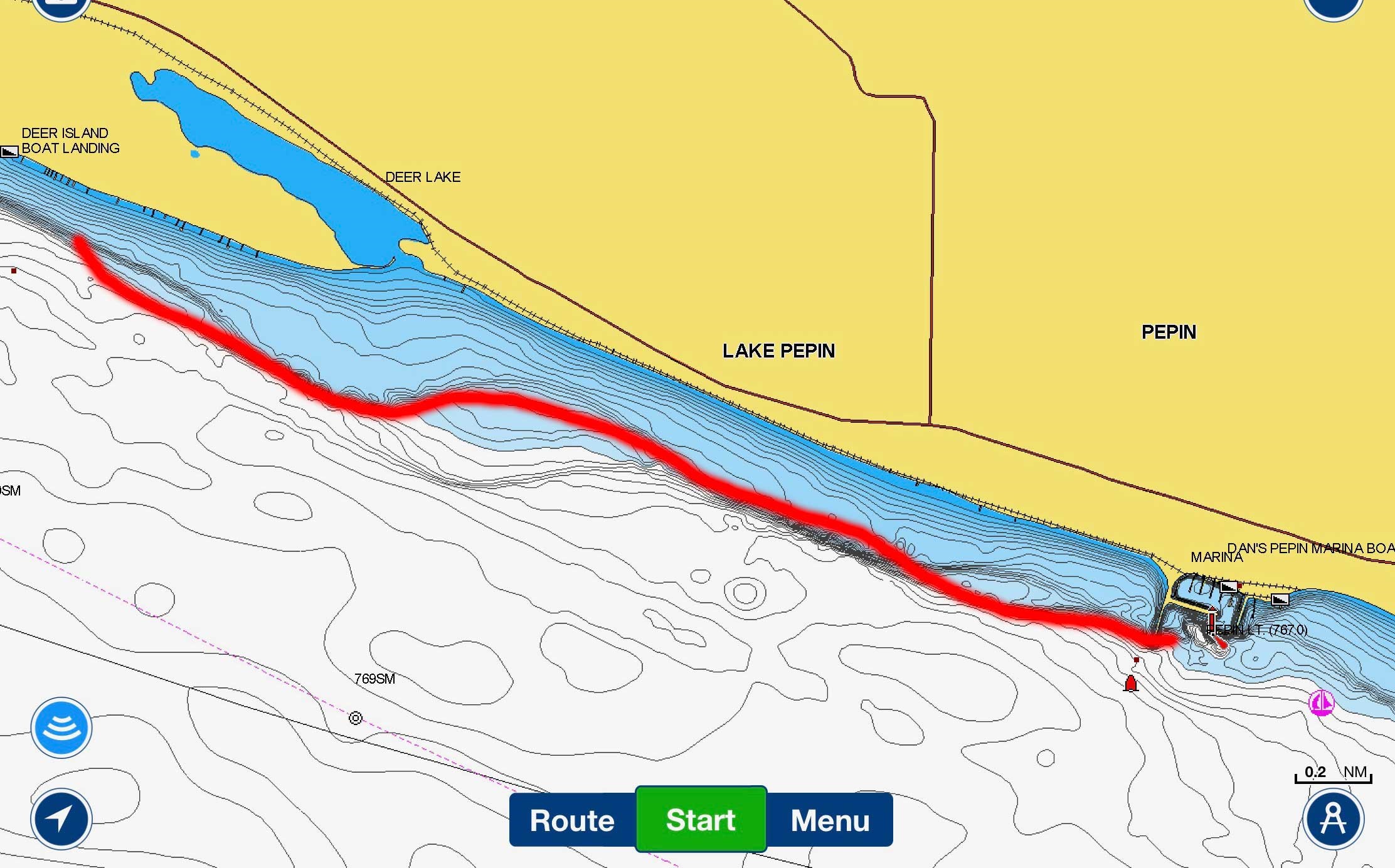 “Incidentally, this stretch is also a prime spot for big saugers in April into May,” he adds. “Saugers spawn in deeper water, and at that time you can often catch fish up to 4 pounds or so by trolling a No. 5 or 7 jointed shad-body crank along the bottom of the breakline—maybe, 15 or 20 feet down. There will be fish here all year long, but it’s especially good for early saugers.”

With its steep shorelines and vast stretches of rip-rap, Lake Pepin is also a haven for smallmouth bass and smallmouth anglers. In April and May, fishermen typically focus on rip-rap areas that fall into deep water, looking for fish that are moving up to feed in the shallows as the water begins to warm up.

Twitching a minnow-body crankbait is arguably the predominant tactic, but a casting lipless crankbait, like a Rippin’ Shad, or a hair jig or curly-tail grub, like a Buck-A-Roo or Impulse® Swim’n Grub to the bank can be just as, if not more, effective. One spot Maloy recommends is at the foot of the lake, just where it starts back into the river. “Concentrate on the steep breaklines on either side; smallies will typically be there through the summer.”

All the lures previously mentioned will work, but casting a diving crankbait along and down the breaklines is another solid option.

Lake Pepin has a reputation for producing white bass of impressive size, and the most exciting fishing comes when schools of these marauders heard balls of baitfish to the surface.

“Always keep an eye out, especially in the warm months, for seagulls and terns diving into the water,” Maloy says. “They’re usually after shad that the white bass has driven to the surface. Get there as quick as you can and cast a Rippin’ Shad, or a larger Macho Minnow or Buck-Shot® Rattle Spoon into the fray. Let them flutter through the baitfish; the white bass will take them for a dying shad and pick ’em off.”

From Labor Day into November, or as long as you can launch a boat, walleye fishing centers on steep drop-offs. Any place where the shoreline drops quickly into deeper water is a likely spot for late-season ’eyes, and one of the best, the angler says, is the stretch between the Ericson Point and town of Stockholm on the Wisconsin side. “The most efficient method here is to cast a fast-diving shad-body crank and retrieve it down or along the steep shoreline,” he explains. “You want it to follow the contour as closely as possible. You can do the same thing with the jig-and-plastic combos already mentioned; you just won’t be able to fish them as quickly.”