Lake Namekagon is one of a cluster of lakes around the towns of Cable and Hayward, Wisconsin, which together, make up a multi-species angler’s dream destination. Walleyes, crappies, muskies, and large- and smallmouth bass are all part of the sportfish buffet in this region of the state, and while Namekagon holds all these species, it’s best known for its spectacular crappie fishery.

In fact, the 2,897-acre reservoir in Bayfield County makes the state’s Top 10 list of crappie lakes. Classed as eutrophic, Namekagon is filled with a fish-holding structure and has a maximum depth of about 50 feet, with a 16-foot mean depth.

“The average size here is 10 inches,” says Northland Fishing Tackle friend and longtime fishing guide Mike Best. He lives in Cable and has been guiding fishermen (Mike Best Guiding) on area lakes, including Namekagon, for more than 20 years. For anglers who are serious about hunting for slabs, he says it’s a must-fish lake. 1. Crappie fishing kicks off in the spring on Namekagon Lake, which could be in April or May depending on when the ice leaves and anglers start looking for pre-spawn fish in staging areas near spawning grounds. Fishing guide Mike Best suggests starting out in the bays on the lake’s northern side, but don’t limit your search to these areas. Any bay that registers markedly warmer water will likely attract fish.

Slip bobbers are another option, and Best suggests a ¾-inch oval Lite-Bite suspending a 1/32-ounce jig head and live minnow. Again, the crappies will be concentrated, and you’ll have to find the schools. Once you do, you can zero in with the float rig.

Crappies spread out in the post-spawn period, with feeding as their top biological urge. “This means anglers will be chasing warm water because that’s where minnows will be, and crappies are chasing the minnows.”

Focus on shallower water, especially where you see signs of baitfish activity, with the jig or a fixed-float rig. Best also recommends fishing both jigs and float rigs on a long, 7½- to 8-foot crappie rod. “With the right rod, you can cast a light rig a mile,” he explains, “which means two anglers can nearly cover a whole bay from one spot. It really speeds up the search.” 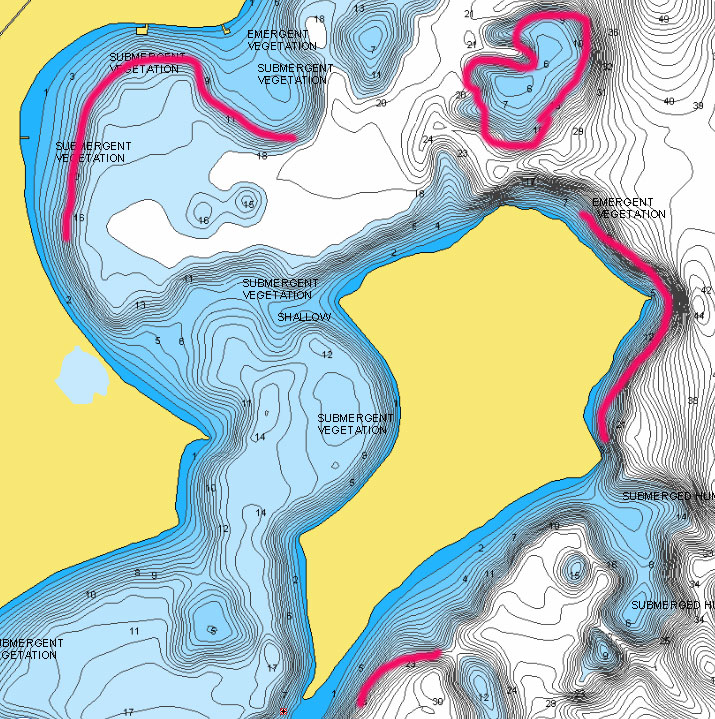 2. Summer brings a move to deep weedbeds, according to the angler, but not just any patch of vegetation will do. “It’s got to be close to deep water,” he says.

Specifically, look for weedbeds that top out at 8 or 10 feet in 14 to 16 feet of water. And they must be within a short swim of water that drops to 20 or 30 feet deep. Best suggests starting out near Namekagon Island, but again, search out similar areas on your own.

Use the same jig-and-plastic as discussed earlier, but fan cast the beds with a medium retrieve that keeps the bait a foot or so above the weed tops. Crappies commonly hang in the plant’s upper strata and will readily come up to attack prey.

Namekagon Lake is also peppered with man-made crappie cribs, which are also summertime hotspots. A float rig is the best way to approach these fish. 3. By late September and into October water temps will have dropped a bit, sending many of the lake’s crappies into the main-lake basin where they suspend over vast mud flats. Best recommends checking flats in the 25-to-30-foot range and looking for fish suspended in the water column.

Slip float rigs are one way to go here, but he also recommends vertical jigging with a lead-head and plastic body, or a crappie-size spoon like a 1/16- or 1/8-ounce Forage Minnow or Macho Minnow tipped with a live minnow.

“Keep in mind,” he says, “these crappies will be suspended and scattered all around the deep mud. Locate them on sonar before you drop a line.”

This pattern holds until the lake turns over, which forces crappies back to the shallows. “Then look for fish in the same places you found them during the spring,” he says.