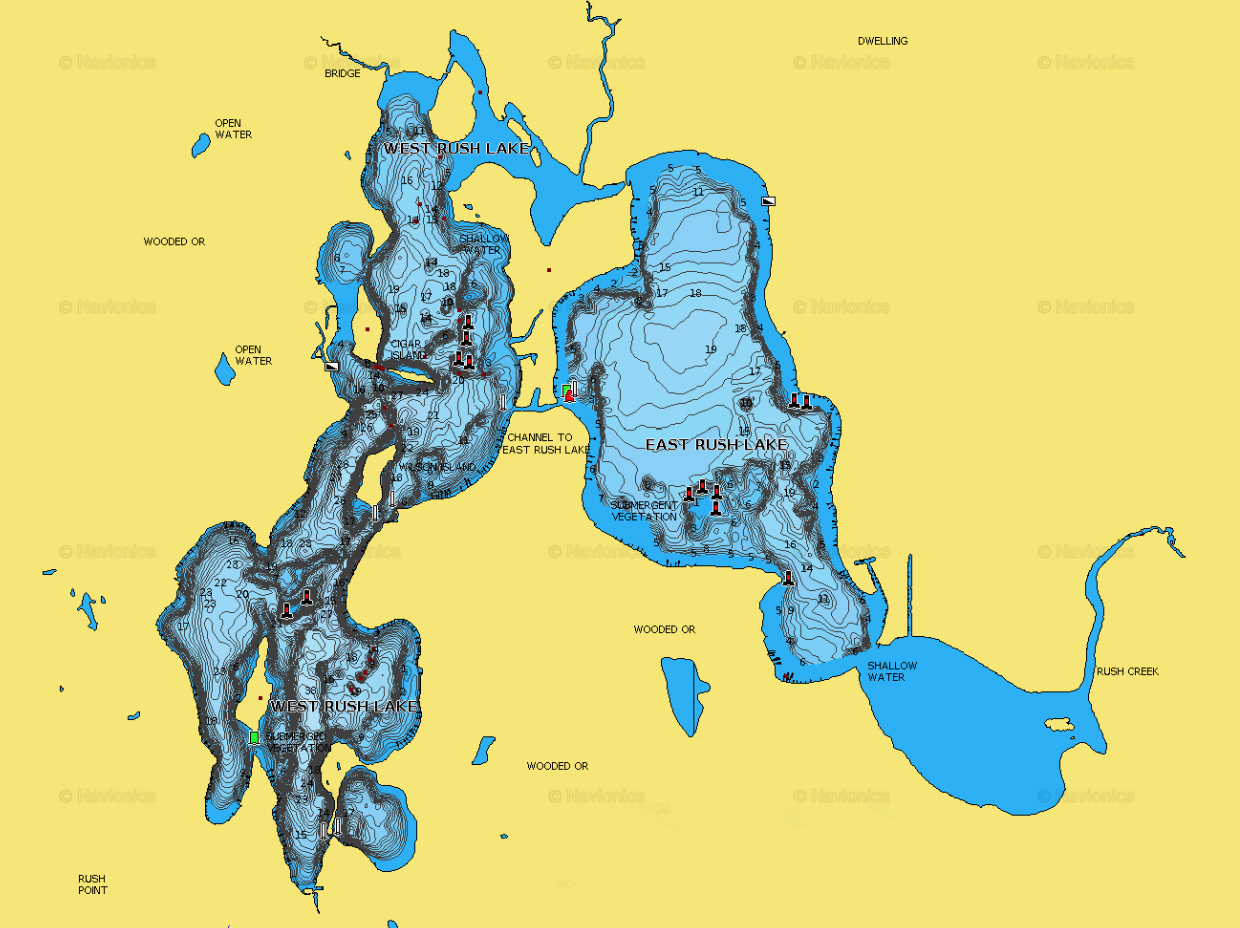 “The Rush Lake system is a great fishery close to the Twin Cities metro area,” says Team Northland Pro-Staffer Mark Courts, who lives not far from the two lakes and fishes them throughout the year.

“I consider it one of the premier fisheries in the area for bass, crappies, and muskies,” he continues. “Plus, the walleyes and pike are decent-size fish in both lakes. Walleyes are particularly overlooked, especially the ones relating to weeds. And while you may have to work to find the bluegills, they’re nice-sized when you do—with a lot of half-pounders to be had.”

Although the lakes are connected by a navigable channel, they’re very different in structure. East Rush is shallower, with a maximum depth of 24 feet, and more windswept. “East Rush is more bowl-shaped, though there is some very good rock structure,” says Courts. “West Rush is deeper, with more structure including deep holes, islands, and offshore humps, and tends to be clearer.” System-wide, algae blooms can result in low water clarity in late summer.

Fishing Tactics
Collectively, East and West Rush offer chances for anglers to fish a variety of presentations for different species. Courts offers a few of his favorite patterns throughout the seasons.

1. In the springtime, Courts jumps at the chance to pursue bluegill and crappie in the backs of fast-warming, dark-bottomed bays and canals. On the walleye front, the May opener sees Courts fishing Roach Rigs and live bait or snap-jigging with either a Fire-Ball® Jig tipped with a minnow or longer-shanked Northland jig such as Slurp!® Jig, tipped with an IMPULSE® soft bait. “Rocky structure, shoreline points, and breaks are all good bets,” he says. 2. During the summer months, Courts recommends targeting largemouth bass in heavy weed growth. “The Northland Jungle Jig® is a great flippin’ jig for working thick stands of coontail, cabbage, and other weeds,” he says. Don’t forget about walleyes while you’re working the weeds, either. Pitch a Weed-Weasel® Jig into open pockets in the weeds, and troll spinner setups like the Butterfly Rig along weed edges. The traditional structure is also a safe bet for summer’s eyes. 3. Autumn triggers increased muskie activity on East and West Rush. “Throwing big spinners like the Reed-Runner Magnum Spinnerbait is a great way to connect with a 40-inch-plus muskie in the fall,” he says. “You can also continue flipping weeds for bass—especially the stands of green cabbage and coontail.”

4. Winter is a busy time on both East and West Rush. Hundreds of portable and permanent shacks dot community holes, housing anglers eager to tackle the system’s bluegills, crappies, walleyes, and pike. Despite the sometimes intense pressure, the lakes offer good fishing throughout the winter months.

Courts steer walleye anglers toward rock piles on East Rush and says a variety of holes, drop-offs, humps, and other structural sweet spots yield walleye gold on the west lake. “Crappies are creatures of the deeper holes, too,” he adds. “Buck-Shot® Rattle Spoons of appropriate sizes take both walleyes and crappies. For pike, fish suckers and shiners on Quick-Strike Predator Rigs in and around standing reeds on West, or weedbeds on the south end of East.”