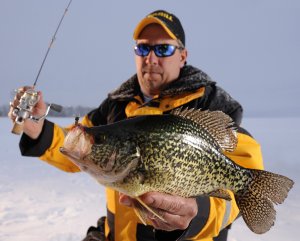 Hard to imagine crappies of this magnitude living on a seemingly starvation diet of zooplankton, but they do. The moral of the story is to size down and slow down.
Photo by Bill Lindner Photography

In my mind, there’s no such thing as the ‘midwinter blues’ when it comes to ice fishing. Waiting it out until late winter isn’t an option, nor is the thought of lowering my expectations – a willingness to accept a mere few fish to show for a day’s efforts on the lake. This is especially true with crappies. They, perhaps more than any other species, can be located and convinced to bite when winter’s odds are stacked against you.

Finding fish is the obvious first order of business. On natural lakes, even reservoirs for that matter, there are principal physical features to seek out. Topping the chart are holes pocketing the basin – deep divots smack dab in the middle of flatness and nothingness. Time on the water has proven that half-acre to acre-sized depressions present the greatest promise, too. Smaller ones simply can’t support a significant volume of fish; larger ones are too obvious and get pulverized by other anglers.

Within these isolated holes, I first find the sharpest break. Crappies collect there. Add a tight corner and it draws a crowd of food – baitfish to zooplankton – as well as snacking crappies. Pinpointing these key features is made simpler through GPS mapping. The Lowrance Elite 5 Ice Machine, for example, carries onboard mapping along with submarine-grade sonar. Probable hotspots are identified before drilling a single hole. Ice fishing efficiency at its finest…

Once you’ve identified these choice congregating areas, pre-drill a fistful of holes, settle in, and plan to stay put. Crappies will appear like a slow-moving parade, making stops on sharp breaks and in dark corners. Pick off a few fish while the slow wave washes through, and then stick it out even if the screen goes blank for a while. Good chance there’s another pod coming to sweep up behind the parade.

Holes are common across main lake basins but don’t limit yourself by getting suckered into thinking more is necessarily the merrier. Many of my top-producing holes are isolated and located inside bays. They tend to get overlooked, not setting up in easily fished bunches where you can move from depression to depression on foot. Oftentimes, it’s that loaner in a bay that maintains the most crappies.

By midwinter, as crappies do touch the brakes on feeding activity, their diet consists almost entirely of zooplankton. And the semi-microscopic organisms are common residents of soft-bottomed holes. The trick then is to fish as small of baits as possible in an effort to replicate the looks and locomotion of zooplankton. Pair a Frabill Spring Bobber with a Northland Fishing Tackle Bro Bug or Mud Bug and you’ll strike fear in the crappie community. The midget jigs and coiled strike indicator play to the lightest of biters.
Photo courtesy of Scott and Marty Glorvigen

Horizontal jigs, like Northland’s Bro Bug and Mud Bug, are fantastic imitators. Without fail, I open with the orange/chartreuse Lady Bug pattern – Fire Ant, a glow red, sits on the bench as backup. With either pattern, slip on two maggots or spikes pierced through their noses. Another option is threading on one of Northland’s new Impulse Waxies. The soft plastic is fortified with baked-in Micro-Plankton™ formula, a powerful fish attractant.

Selecting the right rod and reel combo is equally as important. So significant that my brother Marty and I were asked to co-concept the perfect crappie combo for Frabill. Our energies came to life with the 22-inch, Quick-Tip Ice Hunter. Its super sensitive blank is unified with a cork handle and an ice fishing-specific reel. It truly is ideal for claiming midwinter crappies.

To make Ice Hunter an even more effective crappie catcher, add a Frabill Spring Bobber. The simple device is the best instructional device to visualize the jig’s action below the ice and produce the subtle swim required for light-biting crappies. I affix the finely coiled Spring Bobber to my 22-inch Ice Hunter. As a strike indicator, it reveals even the slightest bites. If the spring straightens out, crappie is likely mouthing the jig and swimming up. If the bead suddenly stays stationary while you’re jigging, there’s a taker as well. It doesn’t take more than a couple of hours of studying the micro motions of the Spring Bobber to become a proficient jigger and bite interpreter.

On the reel, spool micro line diameter, like 1- or 2-lb. test Bionic Ice. The fine and supple line is surprisingly strong for its weight rating – plenty enough for horsing up even thick-backed crappies. Another option is Northland’s new Flourosilk ice fishing line. The heavier sinking line has a co-polymer nylon core with an “invisible to fish” ultra-slick fluorocarbon coating. It’s the bomb for fishing deepwater crappies.

With the assortment of carefully chosen equipment in hand, it’s time to nail the presentation. Again, crappies are feasting on small and slow-moving eats. So any notions of aggressive jigging are off the table. Literally, action imparted by a good case of caffeine shakes yields an effective action. It’s as close as you can get to deadsticking while still interacting with the rod and reel.

Eyes glued to the Lowrance, I spy for crappies passing through the entire water column. Once detected, I gently raise or lower the bait to just above the crappies’ noggins. Crappies are up-feeders. Just look at the composition of their jaws and it’s evident. They tip upwards and filter-feed zooplankton. Your task is to make the jig look and behaves like a pleasantly plump, easily nabbed aquatic invertebrate. Start jigging, cut the action in half, and you’re probably right on. Over-jigging is a common mistake when dealing with midwinter crappies.

The moral of the story is not getting down and out when winter is at its worst. Surely, the bite slows in January and February, but it doesn’t mean you have to spend your spare time playing cribbage and futzing with the boat. On the contrary, by playing the micro game with crappies, midwinter can be just as productive as early and late ice. You just need to adapt to the conditions at hand.