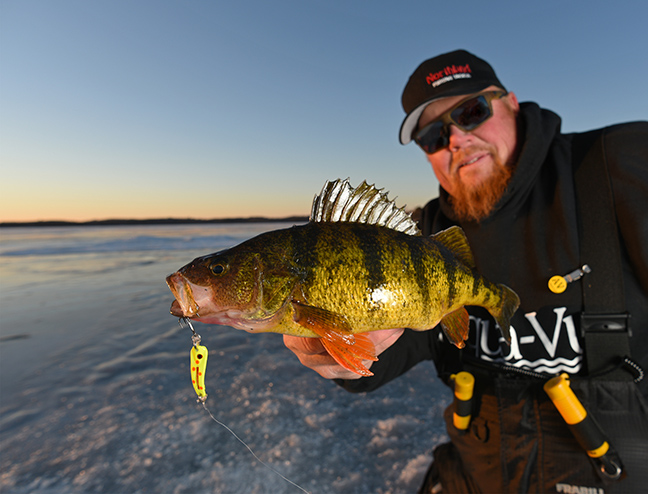 Northland’s Glo-Shot™ Spoon combines strike-triggering flash and flutter with the radiant colors emanating from a Glo-Shot™ Stick. The new spoon is deadly on a variety of predators from jumbo panfish to pike and walleyes.

“The Glo-Shot Spoon is my starting bait for crappies, perch and walleyes, because it gets down fast and instantly starts drawing fish in. And if there are any alpha perch—giant ones—you find them right away with this bait. It’s my first lure down the hole in 90% of ice fishing situations,” says Northland ambassador Brian “Bro” Brosdahl.

The Glo-Shot Spoon is a souped-up version of the Buck-Shot Flutter Spoon, so you get the fantastic action, but with the added Glo-Shot™ light stick. Because of its architecture, when you jig it, the spoon flips, turns, shimmies and erratically slides down to its starting point. You can get it moving with a minimum amount of effort. And the light sticks glows for eight-plus hours.

“For snap jigging, it has the maximum amount of action. The neat thing about the Glo-Shot Spoon is it triggers strikes where there wasn’t any. You get the attention of neutral fish or fish just swimming by. It’s been a phenomenal bait. There are a dozen colors to choose from in the Glo-Shot Spoon, but now add a minnow head, waxworms, or maggots and you’ve got a bait that the fish know right where to strike it. It draws fish in from a distance whether you’re in clear water where the fish can see it from farther than they can normally see it, or you’re in dark water where it’s a must. I’ve spent a lot of time on the ice with this bait and I can guarantee it catches. Plus, it has sticky sharp hooks that bring home the bacon,” says Bro.

New for 2020, the Glow-Shot Fire-Belly Spoon relies on its proven exposed light-stick that provides anglers a powerful Red, Green, or Chartreuse glow which lasts over eight hours. In dark or stained water, the glo-sticks have already proven their worth in a host of other Glo-Shot® baits like the Glo-Shot Spoon.

The Glow-Shot Fire-Belly Spoon utilizes a lead free Z-alloy (Zinc) body to slice through the water column, reaching fish faster, and in a smaller profile. That combination of speed, sans the intimidating sizes so often seen in heavy spoons makes the Glo-Shot® Fire-Belly Spoon a true winner in the category – all while being a good lead alternative.

“The Glow-Shot Fire-Belly Spoon is another winner. With that zinc body it has a little bit different action than the Buck-Shot Rattle Spoon, but keeps the same iconic look. There’s just something to the shape that catches fish. We’re talking decades of walleye anglers who’ve relied on Buck-Shot Rattle Spoons – well now you’ve got a zinc Buck-Shot with a light stick so the fish can see it from further away.” 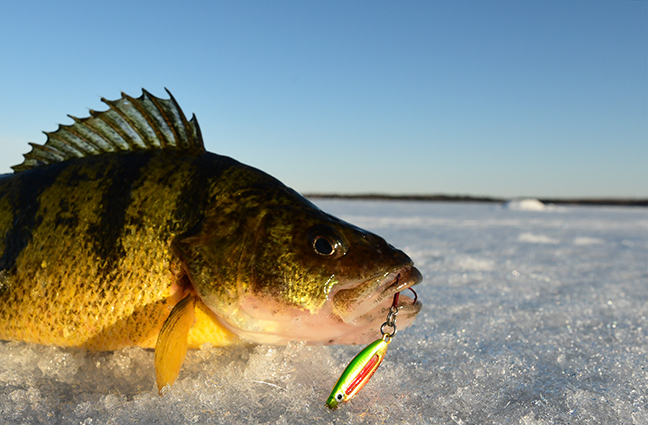 “I’ve been using glow sticks for years, before they existed as a lure. I used to pin them near my lures and they always worked,” comments Bro.

Bro continues: “Some of my favorites are the metallic colors – the gold or silver with a light stick is my bread and butter. Or I’ll drop down a Pink Tiger UV. The spoons also come in UV finishes, which makes it even better for catching fish. And UV Glow Perch is another favorite. And they come in 1/8-, 3/16-, ¼- and 3/8- ounce for all depth and species situations.”

“To use it as a deadstick, hook a live minnow through the dorsal fin. I’ve done that and it works very well on Lake of the Woods and Red Lake. Really, there’s no wrong way to fish them. Just drop it down the hole and get ready to set the hook.”

Another design feature of both the Glo-Shot Spoon and Glo-Shot Fire-Belly Spoon is the double split ring, which ensures you lose less fish. The double split ring allows the hook to go farther in a big walleye’s mouth to hook them where it counts. Plus, they make a high-pitched clang that the fish can feel with their lateral line.

“Glow is really the way to go,” says Bro. “With my guide clients I would say that the number of bites they get with a Glo-Shot bait are seven to one over non glow-stick baits. That’s really a big difference and the proof is in the pudding with crappies, jumbo perch, walleyes, pike, and even trout. The Glo-Shot Spoon and Glo-Shot Fire Belly Spoon are my go-to baits wherever I fish. They attract fish from afar and make the proven designs in terms of shape even deadlier. You owe it to yourself to give them a try!”